The Dog on the Ice 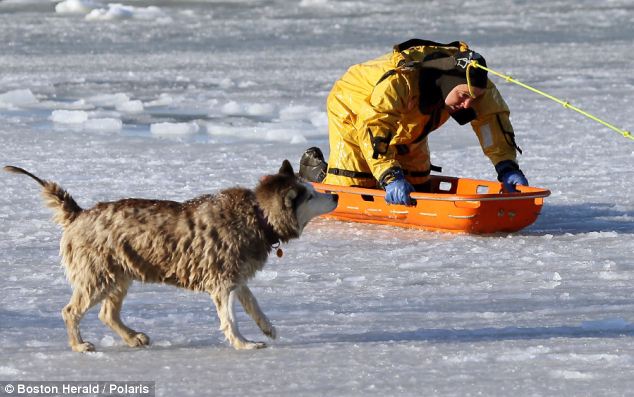 …despite the impossibility of tracing back a single effect to a single cause, human nature allows for no other response to an event. …emotionally….there is always a determined effort to isolate an effect’s cause and to appropriate praise or blame to it.
-Anthony Wolff, Recovery, Revenge, and Rescue: The 3R Murders

This past winter was harsh. The cold weather came in November and worsened. Snow, ice and bitter winds blew across the Great Lake of Michigan. Ice, more ice than recorded history shows, formed on the Lake. A dog, a stray, an Australian shepherd got stuck on the ice for the entire winter. Five rescuers, unknown to one another at first, began heroic attempts to save the dog. The ice, the cold and the wind were massive foes against the brave attempts to save her. The five did not give up. BUT all they could do was get some food to her, reassure her she wasn’t alone on the ice and that when the ice, the cold and wind changed with warmer spring weather they would be there to get her off the ice.

For weeks she struggled alone, on the ice, on the frozen Great Lake until ice began to melt allowing the five to rescue her. But even with when a waterway opened she was so used to struggling when the rescuers tried to get her, she was afraid. She had spent so much time on the ice she had worn her front teeth away and parts of her tongue froze permanently blackened. The scars remain.

Eventually she began to trust the rescuers and was brought in to a shelter, half-starved, frozen and frightened. Soon she may be adopted. She is a sweet dog, her tongue is still blackened, she still has no front teeth, but she gave up her struggle on the ice. She allowed the five rescuers to help her. They didn’t know if they could help her. They gave her shelter, a warm place to live, good food, a medical check-up, and looked after her. But she had to be willing to eat, to drink, to come towards them even though she was terrorized with fear. Something in the dog allowed her to be helped. Australian shepherds are leaders of the pack. They are working dogs; they are used to being in charge, running the pack to safety. She had to surrender her instinct for self preservation in order to get off the ice.

But rather than see her responsibility, probably because she is a dog, our tendency is to hunt for the human being who was irresponsible, the one who was responsible for her being stuck.

According to the Zen Master Anthony Wolff, it is human nature to look for the person or persons who were the cause, to isolate the cause and affix blame or praise on the offender. This nature, our human instinct needs to be given up for us to get off this slippery slope. We have to go against this compulsion to blame or praise. We have to do something much more difficult.

The Zen approach is not so much to let anyone get off scott free or award a trophy to the rescuers when it comes to cause and effect, but rather to start with our own mind. As a Zen teacher explains to a young woman in Anthony Wolff’s novel The 3R Murders–

…The place to start is to take your mind back to the event. Ask yourself if you…contributed in any way to the disaster. Did you choose to overlook…that something was wrong?

This advice is simple in explanation and difficult to accomplish. When we see things go wrong, when help is needed, our human propensity to look outward is a well-fertilized, natural and reactive habit. This instinct, to find the wrongdoer, coupled with our tendency to help, propels us into an external man hunt for the culprit.

We like to draw lines, definitive lines which complete a shape or form and there is nothing more complete than drawing a line of conclusion around the guilty party. It gives us a sense of nailing the perpetrator which circles back to praise for those who seek justice. But this is not the Zen Way. The Zen Way is to realize that our human inclination to find the cause, to help when we see a need is to overlook our contribution. We prefer, which is our ignorance, to blame, praise, fix and repair. We tend towards this approach with little or no understanding of our self involvement.

In Wolff’s novel, the young woman character, Lilyanne hears the Zen teacher, Sensei Wong’s words, perhaps wants to take them to heart but her conditioned habits paired with her human tendency to externalize darken her ability to implement the Zen Way in her own life.

In a previous book by Wolff, Monja Blanca, Lilyanne is coaxed by her parents to leave her vocation in a Catholic convent to return to lay life, in order to find a suitable husband and provide grandchildren to her parents.

At this point Lilyanne does not know the Zen teaching of Sensei Wong but let’s just say she did. This decision to leave the convent was one step in a series of many that lead to Lilyanne being traumatized by her would-be husband and his partners in crime. Although she is not killed she is metaphorically led to the slaughter like a lamb. If we apply Sensei Wong’s teaching, we may circumvent our natural inclinations to blame the criminals who took advantage of her. If we apply the teaching, rather than react from our natural instincts Lilyanne may begin to grow-up and may dodge the identity of a poor, poor pitiable victim.

Lilyanne’s decision to leave the convent was most likely not the first time her parents coaxed her into doing something they wanted, and most likely it would not be the last. We have to remember that Zen is about getting free and what we get free of is our human bent to get caught up in suffering and misery. It’s as simple as what Sensei Wong tells her. It’s a place where she asks the question, “Did I overlook something? How did I contribute to the mess I now have gotten myself into?” This question in itself is a Zen leap of great magnitude. Since those around this young woman would most certainly see her as a victim, as the poor innocent, maybe even holy innocent who was mistreated by rapacious criminals. It requires that Lilyanne and any Zen adept swallow the burning cannon ball of self reproach without blame or praise. It means to stand up and take the medicine without any accusation towards anyone.

The place to look along the line of cause and effect is not as important as the looking and the investigation. In this case, Lilyanne wanted to please her parents and so left the convent. It sounds so human, so much a good, obedient daughter thing. Doesn’t it? Fair enough, it is. Lilyanne follows her human nature and not her divine nature despite the five years in a convent. She is rooted in her identity of being a good girl. We might surmise that she entered the convent to please her parents in the first place. She has not yet found her own two feet and lacks sense. But when she asks Sensei Wong for help, which she does, she opens the possibility of seeing her own eye, her culpability in regards to her own life. This inward turn is the start towards freedom from the suffocating identity of being an innocent, good girl who was victimized.

It’s not to speculate on the countless possibilities of why a young woman, in her twenties might leave a vocation as a celibate nun to the possibility of a life with a handsome, wealthy mate. This work is for her to do. No one can do it for her. The caution for her is to stay away from the edges of praise or blame towards anyone who was even minimally involved. If she is to follow a Zen path to liberation, to divine liberation she must continually ask, “Did I overlook some nagging sense that something smelled fishy?”

This investigation requires a spiritual, ethical and emotional honesty that not many are able to face. It may mean that we recognize that the prize of liberation from one’s own cock-eyed blindness is far too costly. If so, then the blindness continues and a pattern of action gets formed and repeated again and again until death. In Lilyanne’s case she does ask Sensei Wong for some advise which he gives. The question remains for Lilyanne whether or not she remains under the influence of her parents and a victim of abuse or does she enter the embrace of divine sufficiency.

If she sees what she is up to, through looking at her own mind, she can change. Self-sufficiency is ever-present, but she needs to seek it. Otherwise Lilyanne like the rest of us, continue in the darkness of blame and praise, which is an ignorant, dependent place of being self-concerned and not self-aware.

Here are two brief portrayals of self-awareness. In Wolff’s novel, Murder by Suicide, we get a glimpse of what self-awareness might sound like for Beryl, one of the three detectives in the series Zen and the Art of Investigation. She speaks to two of her clients when she hears their dithering, self-concern.

“Beryl stood up, ‘Oh, for God’s sake. Listen to the two of you. Men. Men are such pussies.’ She held out her hand. ‘Give me the keys…'” Anthony Wolff, Murder by Suicide

At the end of The 3R Murders, George another detective in the series speaks to Lilyanne, with whom he has fallen in love. George, several years her senior begins to realize she is still dependent upon her parents when she shows gratitude that he is willing to legitimize the baby of another man. He responds to her worried self-concern.

“‘I understand,’ he murmured. He wanted to shout he understood all too well and then to castigate himself for being such a fool.” Anthony Wolff, Revenge, Recovery and Rescue:The 3R Murders

Of course, this is not whole story; to get the whole story, well…read the books. Find out for yourself. Zen is priceless.