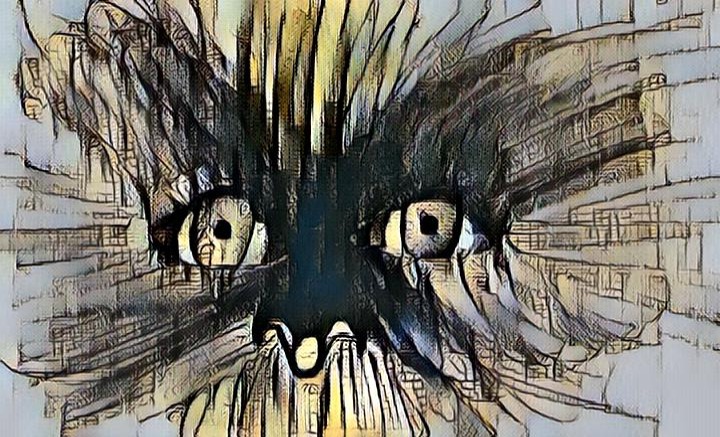 Has Sophia Meyer-Greene tapped into our universal trait in her new flash fiction….

I guarantee you.  You won’t see another of those little devils for at least five years.”

When you call, Arthur Joseph Candicanosi, you call the top guy in town.

I use the strongest chemicals. I get the job done fast. One, Two, Three.

Beautiful home.  Don’t give it another thought about right or wrong. C’mon what are we talking about here? It has to be done.  It has to.

My old man worked for a slaughterhouse. He slit throats . . . proficiently.  Zip. Zip. It had to be done.

After a few years, his employers told him: when a machine does it . . . it’s almost painless and faster. My dad said the owners decided which choice –- man or machine – based on which was cost-effective.

Cost-effectiveness became top priority . . . an absolute necessity, if a business was to survive. Automation. Robotics.  Everything evolves.

No, he didn’t lose his job. He became Director of Operations. When it didn’t go right, he had to Zip. Zip. Again. Machine errors occurred often. Specific procedures had to be followed. He was under the gun.

Yeah, my old man told me he was only allowed to work a limited number of hours a week.  (I think he said 17.)  Yes, 17 hours. The owners said: killing can have deleterious effects when you kill in excess of 17 hours.

His bosses said: Killing too much can make the slaughterer mean. Even watching killing for extended periods can be extremely harmful.

Harmful? Wait until you hear this: The establishment’s view:  Killing can be a sensual experience. They pointed out, studies show, people can enjoy it.

I kill eight to ten hours a day, five days a week.  I’m married, have two sons. On the weekends I coach football. Looking in the mirror, I see an ok guy looking back. Killing has to be done. It has to.”

The woman paid Arthur Joseph Candicanosi with a check and an obligatory smile, hurrying him out the door so he could get started with the work.

She wondered, did his words have a perlocutionary effect? He smelled.  It was a dank, soggy, rotting odor, something she could not identify. She speculated perhaps it was from the substances he used or maybe the odor arose as a result of his work.  The woman reminded herself of what he said.

When the job was completed, he came from around the back of the house. He looked tired. The woman watched as he lumbered down the front footpath.

She thought of him touching his wife…having breakfast with his sons. Did a shower eradicate that smell? The stench lingered in the kitchen. When the woman opened the window, winter’s cold morning came rushing in.

Taking a deep breath, she sighed as she watched black smoke pour out of the tailpipe of his green truck as he pulled away.