A Contemplation on the T’ai-Ki 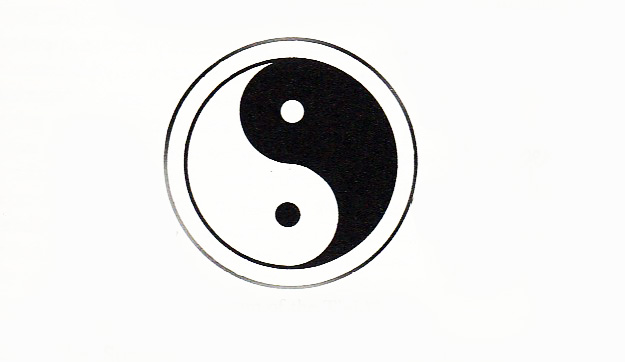 Attaining the Way is not difficult, just avoid picking and choosing. As the image suggests, the natural, material man gets dangerously close to falling off a cliff into vexation when he attempts to separate the yin from the yang, the this from that according to his conditioned ignorance.

He is in the midst of harmony but decides to cut across a false mark between good and bad, right and wrong, like and dislike.  He mistakes dividing things and persons according to defined categories and classification (all that is compared and separated) thinking and believing the dividing will bring him peace of mind.

Foolishly, he strives to purify what is already whole, pure and harmonious. The foolish decisions come from personal preferences – conditioned preferences for and against.

Comparisons of every shape and size come to mind in an attempt to get what he thinks and believes will bring him rest.

Check it out for yourself. You think and believe getting and having it your way will bring you peace of mind.

In the clear and illuminating sutra, Faith in Mind we are given a teaching that gets us out of the hell of picking and choosing, right and wrong, good and evil. It is powerful, yet often skimmed over.

Attaining the Way is not difficult, just avoid picking and choosing.

The instruction is simple and clear but we balk – decrying it is too difficult. Yet, the sutra itself begins with saying, it is not difficult. Just give-up preferences. Stop picking and choosing.

Imagine it? Just stop categorizing everything and classifying everything and stop picking one thing over another. That’s it. This teaching is a beginner’s practice and yet, it is overlooked as being too hard. Sometimes considered to be impossible.

As we go along in practice, we are told there is nothing to attain.

With nothing to attain, the bodhisattva

and the mind is no hindrance.

So, you should view this fleeting world as a
star at dawn, a bubble in a stream, a flash of lightening
a flickering lamp, a phantom, and a dream.

Again, see for yourself. Something breaks down and you get it fixed. Order is established. Then, something else breaks down and chaos returns. It is inevitable. Nothing in the world is real, lasting, solid.

We use methods, such as a hua t’ou, a phrase or question that is repeated over and over again in the mind to stop the proliferation of mental fabrications. Anything in the mind is not the standard of awakening – remembering and forgetting are in the mind making them part of the material world of impermanence. All things that rise in the mind are fleeting and obey the laws of rising, appearing and vanishing. Form, feelings, perceptions, impulses and mental consciousness are short-lived. Any thing short-lived is an appearance – an evanescent, passing that comes and goes.

With these teachings under our belt let’s delve further into the specifics of picking and choosing, (dividing things) which is what we do that keeps us from knowing the truth of nothing to attain on the material plane from a material world that is a bubble, a phantom, a dream.

When we divide the things in the world in TWO, we fail to consider the number ONE and the number THREE. Dividing things in TWO narrows our perspective to TWO making us ignorant of the wholeness of ONE.

The number one (1) signifies unity and the number three (3) signifies the harmonious existence between the two sides of a thing which includes events and experiences. This splitting in two between good and bad, right & wrong, male & female is an endless division of things. We could say, even seeing a thing is a division of taking a thing out of the context of all other things. When we say, I am here and you are there we have split the world.

As long as we maintain a perception of the world through the lens of division,

we are as far from attaining the way as heaven is from earth.

This is a sickness of the mind.

Without knowing the Great Mystery,

Strong words, I know. But we need strong medicine, in order to know:

In any event, in any moment and in any place,

none can be other than the marvelous revelation of ITS glorious light.

Until we know this Truth, we have a divisive practice that cuts the cat in two, according to our likes and dislikes. We continue to label something as good which means we see one side as better than the other side failing to see IT is ONE coin.

Let me illustrate with a picture of the T’ai – ki which is the familiar picture of YIN and YANG. The Black arrow points to the Whole Image known as the t’ai-ki.

The Blue arrow points to the yang principle in Yin.

The Orange arrow points to the yin principle in Yang.

When we look carefully at the image, we see ONE and THREE not just YIN and YANG. Our focus is usually on the darkness of YIN and the whiteness of YANG which includes the two small circles; one white in the dark and one dark in the white. YIN and YANG appear to be dominant in the image – perhaps because it is our human tendency to divide which overshadows the ONE that makes THREE.

The outer circle holds the YIN and YANG forms. The outer circle, makes three into one, shows both the union of the opposites that appear to be in the foreground as well as bringing peace or harmony to the whole image.

If we consider the structure of the T’ai-ki, we can see the outer circle holds the division together in such a way that there is no discord between the yin and yang. The two smaller circles, one white in the black yin and one black in the white yang shows that division does not lead to the absolute of either one. In fact, we are in the middle of opposites.

In any event, in any moment and in any place,

none can be other than the marvelous revelation of ITS glorious light.

This depiction of the T’ai -Ki shows us that dividing things in life along any division lines leads to partiality and diminishes our eye in such a way we do not see the ever-present eternal ONENESS that is in all events, moments, places – nothing is outside this and the ever-present presence of harmony.

If we take this image to be our interior condition, we can see how we remain hunkered down in division – and blind to our true condition. Our tendency is to swing between the two poles of dividing the world.

Now this may seem obvious and we might ask so what – it’s what we humans do – yes, I say it is, but there are spiritual consequences. As long as we remain in division, we remain ignorant to the ONENESS that holds the yin and yang in harmony making us ignorant of the transcendent THREE of the image. (Ekayana, the ONE vehicle; leaping clear)

In summary, we must look beyond picking and choosing. Stop dividing the world according to the skandas. Leap clear of our clinging to the bubble in the stream. And reside in the pure circle of brightness.

And with that, I leave you with another image to contemplate.