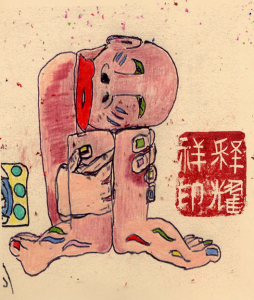 I remember when I was a child holding a soft red leathered book, one of those onion-skin paper small books that even a child would know to handle carefully. I did. I held the book in my hand for moments before I opened it. I knew so deeply from a place that is dark and breathless within me that words were revelations of what I call God.  All words no matter how they were put together or arranged held something so unthinkable I still cannot put words together to explain it. I knew that all words have the power to open the eye that cannot be seen. I knew all words have the potential to cheer up the soul. So there I sat on the floor with my back against the bed and began to read the Travels of Marco Polo.

I looked for the face of the invisible in every sentence and when I found it I stopped because I knew I had met the presence of something more important than anything else I was able to imagine. It was and still is unimaginable. It is only lately that I realize that this realization is shared by others who are far better at making failed but heroic attempts to explain this power. I might now call it, at least temporarily, an eye-opener. And as quickly as I call it an eye-opener I want to append, amend and apologize because I know it is not an evenhanded, nor an acceptable name for what I saw.  To call it an eye-opener is my way of putting my jacket on a vacant seat as a place marker, a way to save the vacant seat from impatient patois.

My suspicions are that there are countless, restless canticles that might want to claim the saved seat except I know that each one despite the beauty and form is a borrowed imposter. All words fail to be other than play-actors. It is not in the sense of a cheat, but in the sense of what is true. In comparison, all words up against what-is-true are cheats.  It may be hard to swallow especially if we cherish words but in the light of the second commandment it is a relief.

“You shall have no other gods before Me. You shall not make for yourself a graven image, nor any manner of likeness of any thing that is in heaven above, that is in the earth beneath, or that is in the water under the earth. You shall not bow down to them, nor serve them. For I the Lord your God am a jealous God, visiting the iniquity of the fathers upon the children of the third and fourth generation of them that hate Me; and showing mercy unto the thousandth generation of them that love Me and keep My commandments.”

Although I wait and at times make an attempt to scribble and bind together an image of what I experienced as a child and what I experience today I know it will be a dim and partial reflection. There is no word, no one word or even a series of words that might claim ownership to an image of God. I might go as far as to say that no artistic expression may claim ownership to an image of God. I know this experientially and my knowledge is both confirmed and relieved by the second commandment.

My experience tells me again and again that everything comes to show me the image of God but everything fails to deliver a graven one; graven meaning indelibly set. In childhood, as today, I see something unimaginable in art even when the tale is fiction. The Travels of Marco Polo is questionable as being a historical and accurate travelogue. In fact, it’s questioned whether or not Marco Polo even existed. It doesn’t matter. The tale delivered the unimaginable reflection of God to a young girl sitting on the floor leaning against a bed.

The best I can do is to do my best to put together words that when they are put together they transcend the contrivances of a material, unfinished form. I am well aware that I am not in charge of any work. I don’t pretend to understand it. But I am aware that with every turn of a phrase a golem, a dumb invention, may be the result.

It is a cultural trend to write, to create an image of God through the creation of a benighted character of such stupidity that the reader is challenged to search for any likeness of goodness in the work. The use of extremes of depravity seems to have no limit along the x and y axis lines of human behavior. I suspect that this trend which seems pervasive arises because it is too difficult to write about godliness in such a way as to capture the reader. It may also be a more sad state of affairs. Writing which underpins every performance in film industry is cavalier. It considers sexual assault, violence and bedeviling corruption as the bread and butter of every institution ever put together by man. Someone recently suggested I watch House of Cards, a hit show as they say about sexual assault, violence and bedeviling corruption in the U.S. government.  Why? Why would I spend what precious time I have watching depravity? Where is the redemption in works where everything is seen through a narrow sexual, violent lens with a corrupted fast shutter speed? The characters are the worst sort of golems, those dumb inventions that insult anything and everyone through vulgar behaviors. They are stupid cartoon-like characters caught in the swamp of the material world with little hope of making it to dry land.

They, however, are an attempt at an expression of God, as broken as they may be they give rise to an impression of God nonetheless. It is the nature of creativity to point to an image of God. The problem for me is that depraved, sexually graphic and violent works suggest an impression of God as unknowable except to those who are already awake. These works, when studied carefully with Buddha eyes, reveal that man is looking for God, but looking for God in all the wrong places.

Readers and viewers cheer the incomprehensible prowess of street-smart characters that lack common sense and little virtue. Competence to get-away with naughty behaviors is looked upon as a humorous dexterity to satisfy the ego-impulses. In reality it shows how mankind at this point in time views virtue between one another as wanton and dissolute.

In an interview by Bill Moyers with Sister Wendy Beckett, a cloistered Roman Catholic nun, he asks Sister Wendy what she thinks of the photograph of the Piss Christ. It is a photograph of a small, plastic crucifix submerged in the photographer’s urine. Moyer’s asks Sister Wendy about the freedom in art today, that art now lacks boundaries and is this what has gone wrong with art today? She starts by saying “…one could say that’s what has gone wrong.” But in her awakened mind she reminds Moyer’s of a principle of theology. “An abuse should not take away a use. The fact that someone abuses something does not mean that it wasn’t a good thing to start with.” She goes on to say she likes rules but rules should not constrict. “This freedom is a good thing, but that it has gone to people’s heads and they have become very silly is very sad.” Moyer returns to the question of the Piss Christ and asks her directly if she is offended. “Well no.” she answers. “I thought he was saying in a magazine sort of way what we are doing to Christ. He is not being treated with reverence. His great sacrifice is not used. And we live very vulgar lives. We put Christ in a bottle of urine, in practice. It is a very admonitory work. Not a great work.”

She goes on to say whether it is blasphemous or not depends on what you make of it. For her, she sees it as the sad state of God, in practice. She hopes it passes. I concur, I hope the use of graphic sex, violence and corruption pass as well.  In my small, somewhat illiterate view of history, it appears to be an age old tendency of mankind to be irreverent, in practice.

The Piss Christ photograph is now over 25 years old. “Hope,” I have been told is what Mexicans say, “is the last thing to go.”