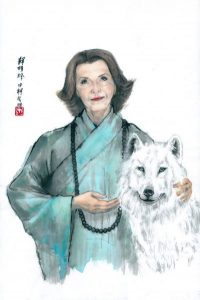 Welcome to this wonderful, iconic essay of our late teacher Ming Zhen Shakya. Many may know this article was published on the Chinese Buddhist website here.

Also, for those who do know of Hank Hill please go here.

This posting is an edited version of the original which is on the Chinese Buddhist website. Hank Hill, television’s Man For All Seasons, is a man of honor and as such does not gossip; and this is why his wife Peggy – who frequently pushes “clueless” into negative numbers, fell victim to that species of Urban Legend we often call, “Accrediting the false through familiarity” or something like that.

Everybody in Hank’s neighborhood knows that Dale Gribble is being cuckolded – everybody but Peggy and, of course, Dale.  Usually it is difficult to condone adultery but Dale manages to lend a certain facility to the task.  Chain-smoking and paranoid, skinny and with the sexual allure of a tangled bunch of coat hangers, Dale helps onlookers to regard with sympathetic acceptance his wife Nancy’s “medical needs” – Nancy regularly is seized by migraine headaches that seem only to relax their grip when she receives the curing touch of a handsome Amerindian Faith Healer, John Redcorn.  Dale, as generous as he is obtuse, is actually grateful to John for attending to Nancy’s needs.

And Peggy?  She sees nothing peculiar in the Indian’s frequent house calls even when they are concluded by rapid window exits.  Imagine her surprise, then, when she accidently discovers Nancy and John, en flagrante delicto.  Uh oh, trouble in Arlen, Texas.  Peggy, stunned, hastens to another neighbor, Minh, and breathlessly announces, “Nancy is having an affair!”  Minh is incredulous.  “Oh my God!” she responds, “Nancy is cheating on John Redcorn?”

Thematically, this is one of the oldest urban legends in circulation:  it arouse in the era before electronic identification of bank checks.  Signatures used to be examined for authenticity by clerks, and the story was that an embezzling bookkeeper had so often forged the signature of the usually absent business owner that when the owner actually came back and presented a check for cashing, the teller deemed it a forgery – it bore so little resemblance to the signature he was used to seeing.

And this is rather a long way around to get to the point of this complaint:  Zen Buddhism and Meditation are a married couple; and the guest who comes to their house is Health Benefit.

But in recent years Health Benefit and Meditation are so often found en flagrante delicto that Zen Buddhism begins to look like a superfluous but otherwise enabling motel desk clerk, one that provides a setting for the assignation.

Buddhist priests and other members of Eastern religions are rigorously prodded, poked, and tested as if they were abductees on an alien spaceship.  The report that follows the examination, however, doesn’t appear in UFO digests; it is published as a feature story in the health section of a news magazine or an in-depth analysis in Lancet.  What about insomnia?  High blood pressure?  Curing cancer?  How does Japanese Green tea, a Zen staple, affect the immune system?  Psychologists view Zen meditation from a more social aspect.  Anger management?  A less judgmental personality?  The merits of Zen Buddhist meditation are rated in a kind of Consumer Report’s lab evaluation.  How does it stack up against other mind control techniques?  If the name “Buddha” were not found in the name of our religion, we’d have no religious identification whatsoever.

Buddhist congregations are photographed as if they were sitting at biofeedback or EEG machines – and sometimes they actually are.  Those who study the pictures assume that the subjects have gathered to get control of bad habits or hypertension.  The Zen Buddhists that we know – the faithful who work hard to gain salvation and weep with joy when they reach it or who bow daily in gratitude to the Merciful Guan Yen – may reverently whisper, “Buddham saranam gacchami” but to the outside world they’re saying, “Look Ma! No Prozac!” Buddhism is an ancient religion which has eight separate disciplinary steps that comprise a single Eightfold Path.  The Eighth of these disciplines, Right Meditation, is a collection of introspective techniques used for achieving higher states of consciousness, which, together with the other seven disciplines, leads to spiritual liberation.

All religions offer introspective techniques for achieving spiritual ascendance.  And if it should happen that these techniques provide additional benefits such as calmness, grater immunity to disease, or lower blood pressure, that’s fine.  But this is not why they are performed.

And when Buddhists lead themselves to the study of meditation’s benefits, that’s ok, too.  They are contributing to the common good and no conscientious Buddhist would refuse to share the benefit of his discipline.  But when the medical uses of the discipline suddenly take precedence in the public’s regard and Buddhism becomes not so much a religion as a therapeutic regimen – or worse, as merely the source of a therapeutic regimen, we’ve got a problem.

We don’t demand respect.  We don’t even ask for it.  But surely we have a right to object when our religion is stacked on the same supermarket shelves as non-religious health aids, and treated with glib, left-handed compliments and amused contempt as it is by Joel Stein in an article in Time Magazine. (Just Say OM, August 4, 2003)

First, the Sanskrit word for meditation is Dhyana which is roughly pronounced as Jana, a term which the Chinese reproduce as Jan or Chan and the Japanese as Zen.  Chan (or Zen) is also the specific name of one kind of Buddhism that was founded in China in AD 520 and which, since its inception has emphasized the practice of meditation in any of its many forms.  But for so long as the Buddha was Indian, our religion is an Indian, “eastern” religion.

“Just say Om,” leads off Mr. Stein, “Scientists study it.  Doctors recommend it.  Millions of Americans – many of whom don’t even own crystals…” Excuse me?

Om is a sacred syllable to those who follow Indian Paths to salvation.  A very sacred syllable…but one that Mr. Stein will later call “creepy” because it is foreign.  How does he feel about “Kyrie Eleison”?

Let’s take a look at Time’s presentation.  Mr. Stein begins with a cute contradiction:  He’s sitting in a yoga studio with forty people, most of whom are pretty women, and he considers it an accomplishment that he is “not thinking about them.”  But in the next sentence he says that once he gets beyond thinking about the pain in his foot, he also lets his “thoughts of the hot women go.”

“Yoga,” means union and the specific union it means is with God.  And, indeed in the midst of this sexual challenge, something fuzzy happens to Mr. Stein.  He has, “this epiphany” which is, “I could be watching television.”

We may never understand why Time Magazine published an article that contained such mocking references to Buddhism and to other eastern religions that emphasize the practice of meditation.  Much respect is accorded those businesses that offer classes in meditation or that study meditators as if they were creatures in a petri dish.  Perhaps Mr. Stein is doing some extra public relations work for those authors who have written secular books on meditation he so nicely advertises.  Time needs to investigate to determine if a conflict of interest has compromised its journalistic integrity.

We can’t speak for the other religions, but Zen Buddhists are not clownish freaks or flakes whose activities warrant their being subjected to this kind of sleazy reporting.  Zen Buddhists were the first American religious group to volunteer to care for AIDS patients – when other religious groups were sneering “Gay Plague.”  Every day Zen Buddhists work without pay in hospices and soup kitchens and prisons.  Everyday people consult Zen websites and receive without any fee whatsoever Buddhist guidance and literature; and, in our Internet ministry at least, people receive Buddhist Precepts and sangha membership at absolutely no cost to anyone except the priests of our Order who personally bear all of the expenses associated with our ministry.

Mr. Stein’s comments are disturbing. “As meditation is demystified and mainstreamed, the methods have become more streamlined.  There’s less incense burning today, but there remains a nugget of Buddhist philosophy:  the belief that sitting in silence for 10 minutes to 40 minutes a day and actively concentrating on a breath or word or an image, you can train yourself to focus on the present over the past and future, transcending reality by fully accepting it.  In its most modern, Americanized forms, it has dropped the creepy mantra bit that has you memorize a sacred phrase or syllable; instead you focus on a sound or on your breathing.”

“Dropping the creepy mantra bit”?  This certainly simplifies Zen training.  Who needs sacred words in the “Do it yourself” Health Benefit business?

Perhaps the editors of Time Magazine would kindly reread those insulting, misleading, and inaccurate comments and explain to us “American” Buddhists why they chose someone like Joel Stein to write about religion.  Calling an article The Science of Meditation and putting it in the Health Section ought to have limited the references to religion.  Instead, while the piece provided scientific information about meditation, its slant was clearly directed against traditional religious practices and in favor of secular, business-oriented groups and authors.

So here we are, after having furnished the bodies, setting and lore for all that scientific data, advised by Mr. Stein and others of his ilk to dump our religious pretensions.  We are just another health benefit group and we might as well accept our lowered status gracefully or risk further derision in Time Magazine.

Hank Hill, a Man For All Seasons, would doubtless be fair in his appraisal of Time’s article.  And in judgment of Joel Stein’s flippant comments, Hank Hill would undoubtedly conclude, “He needs his ass kicked.”