Old Age is a Boon 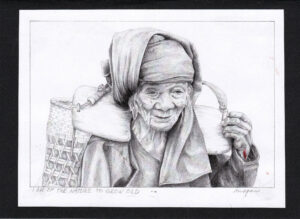 The Four Boons of Aging.

My hope is to pull the door open, even if it is just a crack, on what is beneficial in the truth of aging. I’ll begin by listing out the boons, followed by a short explanation and example of each.

The date and time vary but the mirror tells the tale of aging. Hair graying and thinning, bones aching, toes and fingers changing shape and not in a pretty way; hip replacements and even yellowing teeth. The mind is slower. You’re more forgetful. Not as fast or as strong as you once were. If you stop running, you’ll forget how to – skipping and jumping become dangerous activities. You’ll need jar lid removers, hand rails in the shower and walkers to keep you from falling.

Aging comes upon us all; that is, if we are lucky.

There’s no use in shrinking away, trying to shirk off the inevitable losses of power. It seems like an end of the era of you and the beginning of mortification that ends with death. But let me repeat the line above.

Aging comes upon us all; that is, if we are lucky.

There is little if any hope of restoration of the past. All the dishonorable and glorious parts of being embodied as a human being; being human gone.  So what do we do?

We molt. Yes. Try to take to it. Molting is shedding all the old feathers, sloughing off the old skin, shedding skin to begin a new era…but most of us are not prepared. The culture frowns at aging. The culture smiles at youthful vigor. Even middle age is uncomfortable for those who are waiting to retire into some fantasy of rest and fun. To travel, to join an active community of aging birds.

Where’s all the boons, you ask? This picture, that old face and crooked body, is dismal.

Aging comes to us; that is, if we are lucky.

Aging gives us an opportunity to awaken to who am I.

The first boon of aging comes when we live a long life, say to 100. If we are given this, we have been given an opportunity to awaken to consciousness – to the knowledge and recognition of WHO AM I.

Not that worldly constructed “I” that plays a role, that worries about the outcomes, who seeks satisfaction from the world. Who bears the troubles and struggles of duty and performance. Not that “I” that can’t sleep at night. That frets and measures and is disturbed in body and mind. It has nothing to do with the “I” that has a bucket list of things you want to do or get before you die.

Aging comes to us; that is, if we are lucky.

Aging gives us a chance to discover the immutable…that “I” that has never had a notch on time, which we call a birth date, followed by another notch which we call a death date. No. But the real, immutable existence in consciousness that is beyond the realm of suffering. Beyond birth and death. The “I” that is beginningless.  The you that is not a victim to any of your senses.

So…pray for a long life that will give you this chance to know your true nature. Let that freedom and realization be an aim. Not more stuff. Not more money. Not more prestige. Not more status. Not more information. Go with the change of loss. Let go. Be a nobody, going nowhere.

It may sound like a doomed existence; it isn’t. It is freedom from bondage of things that come into existence, appear, and then vanish. It is a life without clinging and craving.

Aging gives us an opportunity to discover wisdom.

This second boon, wisdom gives us a chance to discover and  know one’s true nature. A long life helps us see and know and understand the arc of life in an intense and deep way as did Guanyin, who is the embodiment of the virtue of compassion and prajna. Both high ground on the spiritual path.

Wisdom changes our senses in such a way that we speak from the depth of wisdom and not from our personal, selfish self. Love, which is unselfishness, which is unconditional is discovered and lived.

We live seeking no gain. There is no concern for the constructed illusion of a separate self. Position, propaganda and the proper hierarchy of institutions no longer traps us; no longer arouses the madness of right and wrong, getting and having, having and keeping and on and on. We see through the illusion.

In order to explain the third and forth boons, I need to set the context with a short history lesson on WWII.

During WWII it became clear to the Allied Powers that they needed one another in order to stop the global threat of the Axis powers. The Allies were Great Britain, the United States, China, and the Soviet Union. Surprising allies in today’s world view, but allies nonetheless. The leaders of the Allies were Franklin Roosevelt (the United States), Winston Churchill (Great Britain), and Joseph Stalin (the Soviet Union).

The Axis Powers, those that represented the global threat, were: Germany, Italy and Japan. The leaders were Adolf Hitler of Germany, Benito Mussolini of Italy, and Emperor Hirohito of Japan.

These were the countries that were considered the combatants of WWII. Many other countries suffered but were not considered the ‘fighters.’  There were, however, ‘resisters.’ The French Resistance (French: La Résistance) was the collection of French movements that fought against the Nazi German occupation of France and the collaborationist Vichy régime.

The “official” period of WWII is September 1, 1939 – September 2, 1945. This WW began 81 years ago when Hitler invaded Poland and when two days later France and Great Britain declared war on Germany.

The “official” end of the war came on September 2, 1945, almost exactly 6 years after Germany’s invasion of Poland which makes it 87 years ago that WWII ended. A lifetime for some.

Japan at the time was in turmoil, with major military massacres and the invasion of Manchuria in the Northeastern region of China. Japan joined the Axis powers in 1940 by signing a protectionist pact against the Allied Powers with Nazi Germany and Fascist Italy. A little more than a year later in 1941, Japan attacked Pearl Harbor.

Approximately 85 million people died directly and indirectly from the war and war-related damages.

Aging gives us witness to the arc of time.

Now, my friends, what does this short history lesson have to do with the third boon of aging? In a very pointed way, it helps us be patient, to be not so quick to act or react, it helps us give guidance to those who are younger. To help ourselves and others not to take what is arising too seriously for whatever it is, will change.

Aging, living or having lived through a long arc of time may give one wisdom that does not come so easily to those of us who are still on the upswing of the arc of time. Those, however, who live long, even on a material plane, if they are inclined even a little beyond a sense of personal, selfish interest, see that everything, whether it be the body-mind complex or the worldwide politick played out before our eyes, changes. In other words, they see the long arm of change in small and big ways making it possible to see the illusion of peace and the illusion of war. Long life provides the opportunity to see the deceiving nature of the things of the world which includes our body-mind structure.

Change is quite forceful to the aged. Loss of position in the world, loss of loved ones, loss of body-mind ability, loss of self-sufficiency, loss of expansion…and so the losses go as Shakespeare clearly puts it.

All the world’s a stage,
And all the men and women merely players;
They have their exits and their entrances;
And one man in his time plays many parts,
His acts being seven ages. At first the infant,
Mewling and puking in the nurse’s arms;
And then the whining school-boy, with his satchel
And shining morning face, creeping like snail
Unwillingly to school. And then the lover,
Sighing like furnace, with a woeful ballad
Made to his mistress’ eyebrow. Then a soldier,
Full of strange oaths, and bearded like the pard,
Jealous in honour, sudden and quick in quarrel,
Seeking the bubble reputation
Even in the cannon’s mouth. And then the justice,
In fair round belly with good capon lin’d,
With eyes severe and beard of formal cut,
Full of wise saws and modern instances;
And so he plays his part. The sixth age shifts
Into the lean and slipper’d pantaloon,
With spectacles on nose and pouch on side;
His youthful hose, well sav’d, a world too wide
For his shrunk shank; and his big manly voice,
Turning again toward childish treble, pipes
And whistles in his sound. Last scene of all,
That ends this strange eventful history,
Is second childishness and mere oblivion;
Sans teeth, sans eyes, sans taste, sans everything.
Shakespeare

But along with these changes, there can come a firsthand bird’s eye view that the material world comes and goes and is an illusion. The world as Shakespeare wrote, is a stage. It does not last. It changes. And this suggests, with the help of history, that peace does not last nor does conflict.  In fact, may we bold as to say “Peace on Earth” is as changeable as “War on Earth.”

But there is a boon that Shakespeare misses, that most of us miss, and that is exemplified by the actions of the Japanese in WWII. It is the fourth boon.

Aging gives us an opportunity to surrender.

I say what follows in modesty and humility, since I do not know if this story is true in the sense of historical verification or a legend. In either case, it does not matter. But there is evidence that Zen Buddhist Roshi’s in Japan were involved in the militarist stronghold in Japan before and during WWII. So…forgive me for my supposition, but I think it might be worth at least hearing the story whether it is true or not. Fiction, as we all know, does point to truths.

The leaders in Japan at that time were undecided as what to do in the midst of great and devastating chaos after the atomic bombs were dropped. Some considered an all out war on the US no matter what the cost to the Japanese people; others were counting on the Soviets to broker a peace deal with the Allies but instead of a peace deal, the Soviets attacked Japan. There were other scenarios but all seemed put the decision to surrender in limbo.

The legend goes that being at their wits end the Japanese sought out assistance from a Zen Master of high regard. Now, we must remember that Zen Buddhist masters and followers were involved in this military rampaging. So it is not too far afield to think that the leaders of Japan would seek out a Zen Roshi for advice on what to do. And in this supposition they did seek out the council of a very old Roshi on what to do who responded with one word, “SURRENDER.”

This Zen Buddhist Roshi, although most likely involved in the engagement of war, saw something from his arc of time that surrender was the only response much like raising one finger or giving the student a sudden slap.