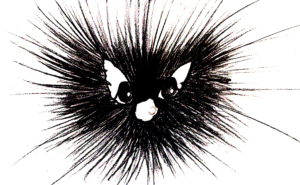 We named him Arthur which is a name derived from the word bear. In Medieval Latin Arthurus/Arturus, usually said to be from Welsh arth means “bear.” In sanskrit, artha means wealth, the wealth that is so full it is complete. So, Arthur endures the complete wealth of life. He is so very much like the rest of us.

He came from Michigan. The first we saw of him was a picture of him sitting in a proper sit-stay with a little blue Michigan jersey on and at that time, he was called Kyle, which means lucky. He came by car at 8 weeks with a history of an early injury to his mouth. He recovered well except he does not like his mouth touched.

That is all we knew of him but we have learned many things from him since he has been with us for 1 ½ years.

His is presence both as a teacher as well as a student. To be with him is to experience the mutual co-dependent arising of knowing the reality of this game of life. Let me explain.

For much of the time he is with me. When I move, he moves. When he moves, I move. Together we experience this mutual, co-dependent arising. We, he and I, influence each other. This influence is true for each thing. There is nothing in reality that is separate.

As I was in the zendo sitting, Arthur was with me. Our 5 ½ year old named Harold Godwin. named after an ancient King, was asleep on the floor next to where I was sitting. Arthur, our lucky treasure, was pacing.

I remained still. Silent. Eyes-half-closed. I watched him. Intermittently he’d come and stand in front of me trying to make eye contact. I closed my eyes. Then, he moved closer and sat down in his perfect sit-stay and stared at me. I did not make eye contact. But I could sense his stares.

When stares did not work, he cranked it up and placed his head on my thigh. I still did not move. Then, he nudged and nudged my arm. I remained still. I did not respond to him. I did not react to him. I did, however, notice him.

I was aware that he wanted something and his wanting something made him restless, unsettled and yes, anxious. Throughout all of this restlessness he would periodically go over to the window and look out at the squirrels; those tormenting rascals who run along the fence.

Arthur is a predator. His instincts of being a predator were in high gear, but I did not move. I knew what he wanted. He wanted to go out and give chase. And then, after he chased the unsuspecting squirrel he would come back and jump on the screen door to come back in. To do it all over again. Pace, up, down, restless!

But I did not give in. I remained still. Quiet. Watching. Seeing his agony which comes because he is not trained. He’s not tamed his instincts. He is out-of-control and restless.

This behavior is a pattern.

He wants to go out and chase the squirrels. I resisted and did not move. He was confined in such a way he had to deal with his instinct differently.

BUT…you say…that is Arthur’s nature…why didn’t you let him out and let him chase the squirrels. LOL I laugh because this giving-in act is what we do with ourselves and one another.

AH…I hear you saying, “he’s a dog.” Yes. He is a dog. And dogs are able to tame their instincts with some help from us. He can learn to be calm and quiet and rest. But he needs our help to let go of his instinctual drives to attack and kill.

Furthermore, I know Arthur to some extent, created his own hell with his desire to get out and chase the squirrel. Just as we create our own hell with desires to get what we want.

But desire held in silence and in watching awareness, in time, protects him and allows him to give up his restless desire. He gave it up. He got himself out of hell through the door of resolve.

I acted as his guardian or what I prefer to call ‘Mother.’ Not a mammal mother but an immutable, unchanging ‘mother’ energy that protects and teaches and watches and holds back and is resolved to awaken us. Parental Mind is part of our nature.

Many of us need help to tame and train our instincts. To be resolved to stop going after all the many desires that fill the mind. We, like Arthur, think if we get such and such then all will be hunky-dory. In fact, however, desires are endless until we have experienced samadhi, union with the Divine Self.

We have to be able to STOP…citta vrtthi narodha….the uptick of thoughts of desires by not acting on them. How do we do that?

We watch our desires in stillness and silence whirl around and whirl around in our head making every effort to get satisfaction by some action. Action to hold still, to be resolved to let the desire whirl away.

Just as I watched Arthur, but did not act. Thoughts come and go, come and go, and it is our work not to give in to the endless desires that come up. Don’t believe them. Doubt your thoughts by watching them and watching them in such a way you see how they want you to act in such a way that will result in returning to this whirl of restlessness. When you give in you return to hell.

Our situation boils down to surrender and trust…which requires that we do not measure ourselves along the lines of success and failure of getting what we want. In fact, it is far better for us not to measure ourselves at all since measuring disturbs our mind. Instead of trying to get what we want, we’d be far better off if we use that restless energy to pay attention to the what is at hand right in front of our nose and give our excellence to what is required. To give our finest to whatever we do, rather than be swept up in the whirl in our head that drains and dulls our brilliance.

Arthur, our lucky treasure, counts on us to awaken and finally nudges us to help him even though all along he was being helped but didn’t know it. Am I not the same – Mother Buddha watching until I finally nudge her to help me having forgotten she has always been there helping me with whatever is haunting me with mental formations.