and all the devils are here. 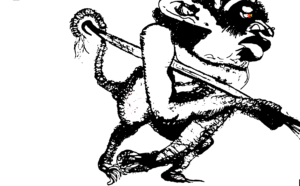 This fellow Shakespeare knew a thing or two. The line comes from the mouth of the young character, Ferdinand who has just experienced being shipwrecked. Although he is unharmed, the storm was a violent and frightening experience. And he does not know that others are on board, including his father, are safe and sound though shaken up by the, dare I say, the spiritual storm. Little did he know, nay, little did anyone on the ship know that Ariel, a spirit in bondage to the magician Prospero, was following orders to bring the ship aground in a thunderous storm  without as much as harming the clothes on the backs of the passengers.

Was it all a trick or is this Shakespeare’s way of once again telling us the truth of our lives of embodied skin bags.  Is life unpredictable? Is it under the influence of invisible spirits conjured up by magicians, those long-forgotten soothsayers of magic spells and incantations.

Perhaps we all feel shipwrecked by the states of utter confusion from the global pandemic and the recent and ongoing chaos of American elections. It doesn’t look like the current resident in the White House or the mysterious COVID-19 virus will be leaving anytime soon. What magic will it take to get them to leave?

Donald Trump continues on with his incantations on Twitter which is more or less the same as Prospero’s spiritual slave Ariel, putting aground the ship of state. His magical thinking wants to change the results that make him a loser at the ballot box and a loser against the virus. Like Prospero, the resident in the White House and the prevailing virus are  grounding the ship of state. Is it fair to say both came about from our negligence?

Are we so unlike this magic man, this Prospero who lost his kingdom from his own neglect? You see, he turned to magic as his idol. He was swept away, bedazzled by what magic he could perform. Yet, Shakespeare saves him by stripping away his title and banishing him to a far-away island.

Is the bard indicating Prospero had a lesson to be learned about his karma. As the story goes, Prospero neglected his Dukedom.  Don’t we neglect our human reign? I think we do.

When a stripping away comes, which it surely will, will we come to terms with the loss, with the banishment from what was once something we thought was “ours to own?” Hell is empty leaving all the devils to disrupt us with manifold losses and unwanted changes.

We, however are headstrong. We forget about karma. We think it won’t happen to us. Yeah, sure the other guy, but not us. I am here to tell you – it will happen to you. It’s my job, you see. To tell you and to offer some consolation and then tell you to get up and keep going. Don’t give up. Pull yourself together and keep reading.

Karma is action. Action is all-pervading. There is nothing shrunken about it. There is nowhere, no place, no position in life that is outside of KARMA, a sanskrit word that means TO DO.

Think about the two residents in the world I spoke about above. It is quite difficult to pull apart the cause and the effect of what is happening on that front.

What we can say is that karma is both the cause and the effect of action. It is a rolling wheel; seemingly out of nowhere and endless.

Furthermore, we are confused by this rolling wheel of cause and effect and think and believe we are in charge of both the cause and the effect. Isn’t this so? The whole world seems to be under the illusion that we can get control of this wheel once and for all.

After all we are in charge, aren’t we?

Well, my friends that is the question? Much of our youth is spent thinking we can do such and such and make things happen – but it is not only our youthful invincible madness that thinks we are in charge – but our claim and attachment to power and things. We are mad to think we are in charge…in control…that we own anything at all. We are, at best, caretakers who need to bend down and bow in gratitude for what comes our way.

Before you get too disgruntled, too obstreperous with “yes, buts” here is a prick of magic.

Let me put a pinprick into this illusion of thinking we are in charge.

Are you in charge of birth and death?

Just ponder that question for awhile.

Of course we can palliate many physical sufferings – sometimes well and sometimes not so well. But birth and death? Ah, not so there. And it is a good example of karma yoga.

So what are we to do? AH…yes, what action (karma) as spiritual devotees do we take?

Sorry for the dither. But it depends is the clearest answer I can offer. It leads me back to you. Yes, you. It depends on your aim? If you like, your goal in this round of birth and death that you call your life.

It depends on your goal? Are you scratching your head? I hope so. I hope you give this some thought. Some contemplation.

Many, many…I might even say, most…seek things that will bring happiness and pleasure. Sorry. But it’s true. We give a short shrift to philosophy and opt instead for the lower pleasures of eat, drink and be merry for tomorrow we die.

Ask yourself, “How do I spend my life?” Hopefully you will see where your treasure is.

Where is your treasure?

The answer is infinite, because we are in an infinite existence even though we think, believe, live as though this body-mind complex is who we are and all we get. The answer, in general, is some thing, some person, some position, some place…and the list goes on.

OK. Don’t make a judgement for or against your treasure. It is, after all, in the infinite possibilities of our infinite existence. Please do ask yourself where does this treasure I seek come from within myself and where is it taking me?

Perhaps you want to be a father? A mother? A teacher? A financial wizard? Historian? Scientist? Surgeon. Artist. President? A bum? Wayfarer? Traveler?

The list is endless…the possibilities infinite. SO…where are you? Examine where you are and consider whether or not you had control. Has life lived up to its glamorous, glitter of promises? Let’s ask the man who has barricaded himself in the White House? Or those who have been struck by the virus? Or lost a loved one?

I know, as you know, the answer is whatever your life choice is, it comes with ups and downs. Disappointment and satisfaction. It is the nature of this realm. And it is what Shakyamuni Buddha saw as a young man – birth, death, old age, sickness and yes, karma.

His realization led to devotion to find out the Truth of this reality. We all can see what he saw, but we have to have a high goal as he did to know how to live in the midst of birth, death, old age, sickness and karma.

Let me offer some strong suggestions to those of you who have a high goal that goes beyond the vagaries of pleasure and pain. It begins with devotion.

This is the Way to enter the puzzling, dazzling limitless existence beyond the body-mind complex.  Are you paying attention?

It is with this attitude, obeisance, that we realize we have been given a sword of Light which helps us meet the struggles of the spiritual and physical world. It is knowing that to abandon reward frees us to throw off that which burdens us – to cut off our selfishness. Yep, that’s it. Selfishness burdens us. when we think of our self as first, last and foremost we cannot give ourselves with deferential respect. There is simply too much pride that blocks our deep bow. This selfishness comes in infinite ways to make us think we are something special. Smarter, brighter, better. Those who suffer so think of themselves above others making the fall a bigger, harder crash. It is that old saying, pride comes before destruction and haughtiness comes before a fall. A good one to remember as we must  also remember…

Life is full of storms.

It is inevitable. But remember the sword that comes from giving up rewards, giving up results is pregnant with Light – from top to bottom. With it, we slay the devils…we bow down to that immutable, Supreme Self that does not harbor any thing against us – that which waits for our self-realization of knowing who we really are.

In some very unusual way, something bigger than a book of words or long conversation or intellectual delving, we have been given the storms, a world-wind of a virus that appears to be running unbridled over the world. In an odd-shaped way, we have also been given a world leader who appears to be doing the same. Both are hidden, out of sight, waiting to attack like unseen ghosts that can harm us all.

You say, “We must take precautions.”

May the merit of this work be beneficial to all beings in the ten directions.