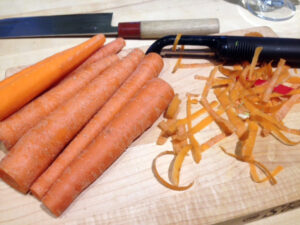 A Daily Practice of Devotion

Innumerable sacrifices brought us this food;

We consider how it comes to us.

We reflect on our virtue and practice, and whether we are worthy of this offering;

We regard it as essential to keep the mind free from excesses, such as greed;

We regard this food as good medicine to sustain our life.

For the sake of enlightenment, we now receive this food.

The key word, is sacrifices. An old word that is rarely used except perhaps to garner some gain or fame for oneself. Let’s start with a very brief look at the history of the word and then shift to a focus on birth and death.

The word sacrifice comes from the late 13th century., meaning “offering of something (especially a life) to a deity as an act of propitiation or homage;” by the 16th century the word came to mean an “act of giving up one thing for another; something given up for the sake of another.”

The 16th century definition is more or less how the word is used today. Sacrifice is an exchange that occurs between one person and another person in giving up one thing for the sake of another thing. In other words, a sacrifice is more or less a transactional deal.

In the 21st century, sacrifice or the killing of one thing as an offering to a deity as an act of care either a propitious care or a care offering of respect is admittedly hard to see. And here is where we shift to the focus on birth and death and the daily devotion of sacrifice.

We’ll begin with the apparent cause of death and follow it through in a bullet approach.

As I hope you see, if you are stuck in this ignorance, you suffer. And there is very little, if any, capacity to live a devotional life.

Devotion would mean very little to those amongst us who think we are the “boss” – the one who makes everything happen that has happened in one’s life. This situation, my friends, is most of us since we have been conditioned to claim everything as “ours”.

Let’s take another look at that word, sacrifice, but this time let’s use the older definition.

But that doesn’t mean sacrifice is obsolete. It is not an archaic activity. It is hidden behind our ignorance of thinking we are in charge; to be more specific, the ego has been conditioned to think it is in charge. This claim by the ego is ignorance.

With that in mind, let us reckon with sacrifice in the 21st century.

Right there, where you are, sacrifice is in plain sight; but you may not see it because your vision is blurred by selfishness. Let me assure you that we have the opportunity to see sacrifice in the activities of everyday life; a devotional practice.

Preparing and cooking a meal is a good example of sacrifice

as a practice of daily devotion.

I cut up vegetables. I boil them, then roast them. I skin the avocado and dig out the green flesh inside and discard the seed. I prepare the carcass of a turkey by removing the neck and gizzards then wash it thoroughly before I season it and roast it. I pull off a leg to test to see it the bird is done. I mash potatoes which are the tubers of the plant. The tubers supply nutrition and help the potato plant survive the winter. Instead of leaving the potato on the plant we pick them and eat them. We eat the storehouse of nutrition of the potato plant. The potato provides energy to the plant as well as reproduction. The potato, the turkey, the avocado, and the vegetables are examples of sacrifice on your table. The cook and cook’s helpers are the priests; those who prepare and make ready the sacrifices to eat.

When we look closely, study what is right in front of us, we see that our entire life has been a gift. A gift that is full of sacrifice. Not the type of sacrifice that boasts or claims the victory or the ownership of the sacrifice, but a deferential respect for what shows up in our life as an opportunity to care for whatever it is in such a way that it is an offering of devotion.

Nothing is left out. And you can see this sacrifice, this practice that is a universal offering to life which promulgates devotion for all things; visible and invisible right under our collective noses.

Innumerable sacrifices, indeed, brought you your food, consider how it comes to you.