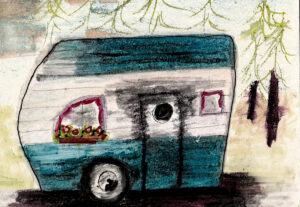 It was a hard day – like most. The ground felt as though it was on an uphill incline no matter where he placed his old toes. The leather boots helped steady his frail legs and arthritic bones. Convinced he’d fall on his back without them, he kept the pair close by his bed for his night time trail walk to the cramped but utilitarian bathroom only a few feet away.

He laughed every morning when he read the imprint on his old dungarees – ‘Levi’s.’ The laugh came from his head where everything he ever knew or said was stored. ‘Levi’s.’ The word formed into a wry smile on his face which like a cover on an old Saratoga trunk held down all the funniness of life.

Funny words and descriptions were out-of-place, corrupted, exaggerated by advertisements.

Smacking his lips together after he said the whole word out loud, he felt satisfied.

His pants now draped over his hairless bones as he commented on the demise of everything. His knuckled fingers tightened around the beltless loops of his dungarees as he corrected his commentary. He needed to be accurate.

“Nothing new under the Sun. Just another day, another dollar. Of course, it wasn’t always a dollar. It is not a dollar now. The almighty dollar. No, sir. A dollar doesn’t work like it once did.” There was no immediate satisfaction. No rest from the popping of thought going on in his head. He liked ending his commentary with a certain propriety. The word sir was common amongst many other words – words like all the funny things in his mind that were in some old trunk somewhere underneath the pretense of something new was better and even worse, best.

There was no reason in particular for him to pull on his dungarees, but he did. It wasn’t just a habit. It was a form. Something he knew was both grace and gratitude. The night before he, like all the 32,851 days of putting the dungarees over his thin-skinned legs, emptied his pockets of whatever he collected on the route of his high-level moments of being alive. When he lived with a woman, a being who was unlike himself, he had more than one belt. The woman insisted he have more than one belt and when he would inquire of her why did he need more than one belt she’d tell him, ‘you never know when you might need it.’ This reply, if he let it, still puzzled him. When he lived with the woman, it always puzzled him. The inquiry would not last long – when he’d tell her with gestures of kindness that he had one waist and two legs and in reality, could only wear one pair of dungarees at any time which meant his need, if he succumbed to such a need, was for one belt. The woman not like him listened in a silent politeness up until the point when he in his generosity offered what for him was the denouement of the subject on the table – “I will never need more than one belt.”

At this point, the woman’s brow would shrink with rivulets of skin suggesting she was contemplating his conclusion of never needing more than one belt. In turn he listened in silence for her response. The woman usually squinted before she answered these exchanges and shrugged just before she’d tell him with a sweeping away voice. “You, sir, never know.” This broom-like moment left both of them silent and staring with adoration into each other’s eyes. Like a rug being pulled out from under them they landed together in not really knowing much in terms of reality. Knowing he couldn’t argue with the possibility of needing another belt – and she felt content in stating what she knew was the truth. There had been a few times when he would explain his need in terms of now by adding the word now and sometimes emphasized the word now with the word right.

“Right now, I don’t need more than one belt.”

The woman’s cheeks, which were hairless and rounded with soft skin, turned rosy giving her an advantage, pressed her plum-colored lips together in a smile that made her eyes dazzle replied,

“There you have it, sir. You never know. Nothing stays the same.”

Over the years he learned to be like a slick yellow raincoat – those kind that make lots of crinkling noises when you put them on, the kind with a hood and if you like, matching slick yellow trousers. He let everything the woman said, especially when she smiled and issued forth with the triumphant sword of possibility, run off his back. He knew there was no response to possibilities and deep with him he cherished her resolve to hold to the position of possibility. In almost every way the woman was unlike him. They never let their differences interfere with equality.

Those were the years when he lived with a woman. There were times that he considered the possibility she was right but he tried not to get bogged down by the past. Like a wet dog he tried to shake off any ideas that bogged him down and most of the past came with a soggy force.

Right now, he lived in a Subcaster. It is a small 14 feet footprint which he sometimes counts as he makes his way during the night to empty his bladder. In the years he’s lived in the Subcaster, he has never been able to count up to 14 feet inside the trailer. Oh, he knows the 14 feet must mean the outside length but even so there is a disturbance that he is unable to get a number that matches the description. The disturbance is not a wonder for him, but the mismatch of what is written down compared to what is does disturb him. He feels cheated and it is like an itch on some part of his back he can no longer reach.

“Advertisement.” He says the word in syllables. “Ad – ver- tize – ment.”  He repeats it with a different inflection. “ad VERT-is-ment[1]” Smirking he says it yet another way – “ad – vert- is – ment.” The last one is his favorite and he admits to himself it is because it agrees with his view of the meaning. Meaning especially in regards to liability and not telling the truth. ‘For the life of me, I cannot find the 14 feet in this Subcaster.” Puckering his lips before he guffaws, he bows to the words and says to it. “I see. I see. You little scoundrel. I am not to expect any truth in anything that is under the rubric of ad -vert – is – ment. It is meant to fool me.” He bows again and this time grabs the top of his dungarees and slides them up to his knees then stands to pull them to his flat, sunken belly. Admitting the durability of both his legs and the dungarees he relinquishes any quarrel over the incongruity of the 14 feet. “After all,” he concedes, “my feet are not 12 inches long.” For a moment this disturbs him further since he must reckon that if that is the case that the Subcaster should count out beyond the 14 feet. But he is tired of the dialogue with what is true and drops it out of hand.

With both hands he rubs the sides of his cheeks checking for stubble. The bristle is a sparse and random shadow of former years making him the sole judge of whether to razor it off or not.  He decides for no particular reason, today is a day for a clean shave so he foregoes his denim shirt that hangs on a small plastic hook next to the tight concave space which is more like an upright locker than a bathroom. Tucks in his loose gray undershirt before he soaps up his hand. For years he has leaned in against the mirror so he can give himself a close, cut-free shave. Rinsing the razor for a final time he shakes it off and sets in on the bottom shelf of a wicker cabinet. With clean, warm fingers he checks for any stray whiskers he may have missed. Slips on his shirt and tucks the tails between his stretched-out undershirt and his beltless pants.

A murmur-unspoken comes to mind and he wonders how not having a belt might be the truth of his need in his discourse with the woman. How might it resolve the mystery of belts and need for one? For just a moment he wonders if not needing them might be the perfect answer. Before he slaps his thigh with the force of a by-golly triumph he feels a sharp pang of sadness. Never in all the years did he ever want to feel triumphant over the woman.  Once, however, the shirt is smoothed down from back to front between the dungaree cloth and his underwear and the pants are zipped and buttoned; he notices how they fall below his waist and rest unsettled on his hard-hip bones.

“Oh. Dear.” he says aloud in a mocking way. He finds he has nothing else to say. Nothing more to add. No discriminating comment or judgement. No follow-up.