I have for some time, viewed many of the essays sent in and finally thought possibly I would send something in that possibly may be of interest.  I am new to the Order in 2020 and  I am learning much from all of you who express your Hearts & Minds  through your writings.

Since I am new to this Order, I just realized I had better introduce myself.  I am Arakawa Mitsugi, reborn once again as “Lǎo xīn shàn Shakya”  (otherwise known as “ Old Heart Mountain” )  which I find most respectfully expressed in this Buddhist Order of Monastics.

Today, is the 15th of February 2021.  In two days, I begin my 63rd year in the Path of Martial Arts & Sciences, which I entered many years ago.  I have only been a Monk approximately 27 years.

Many of you within Hsu Yun Ch’an Yuen’s Martial Arts Dojo division may have vast knowledge in the Ancient Ways at which I follow for many years. Most modern-day Ryu of Budo, whether Japanese or Chinese Lay Disciplines have omitted many Spiritual

( You will have to forgive my using the term “ Master” as, for one, I do not believe in anyone being a Master; only those who are continuous ‘ Students of the Path’  and I mean no disrespect towards anyone who are looked upon as Master or Expert ).

I have studied, searched for and upon finding, researched all I have studied over the years.  I am a Practitioner of Buddhist Chinese Ch’uan Fa ( referred to as Kuntau ), Japanese Aikido  and  Tibetan Lama Pai Haaga; each of Ancient Buddhist Origin Transmission, with the exception of Japanese Aikido ( although Spiritual ).  I have additionally studied under Hindu Priest, as well as Yogi & Swami-Ji.

So in this, I believe I am well versed in many areas of Ancient Classical Traditions- however, again, I am NO Master of these Traditions and my overall knowledge rests only within these Transmissions.

The one area I am most fond of, have studied under the delightful Asian Teachers, were the stories that were awarded as they were just as much a part of our Spiritual development as were my “Combative Waza” Teachings.

Here is one of them.

“The Master & His Young Disciple”

The Master Hoshi ( Monk ) asked his young Disciple student,  to run out and pick herbs for the afternoon’s meals. The young Monk was a “Yokasei,” ( a Novice ) that wanted to impress his Master.  He immediately left out of the Temple and went into the forest, and after some time, arrived at the Tang-Ji Mountain paths where herbs were plentiful.

As he began picking herbs and placing them in his cloth sack, he began to travel further up the

path where he sometimes would swim and bathein a shallow part of the mountain creek.

The young Monk did not realize that the Master had decided to follow him as he knew all too well the Young Monk, who was around the age of 8, was rather mischievous at times.

As the young Monk traveled the path further into the mountain-side, he came across the mountain creek and there, he saw a lone fish in the water at which he decided to catch.

When he caught the small fish, he then, tied a string around the fish and on the other end, tied a small stone.

Releasing the fish back into the creek, he began to laugh as he saw how difficult it was for the fish to swim.

After laughing at the struggling fish for several minutes he began to follow the path once again at which he saw a frog and immediately chased it catching it and again, wrapped a string around the frog’s body and tied another stone on the other end.

Immediately the young Monk ran after it and catching it, began tying a string around its body with a stone at the other end of the string.  Of course, the snake had difficulty in wiggling away.

The Master had witnessed each of the three occurrences but said nothing each time.

Early the next morning at breakfast, the young Monk began to complain to the Master Hoshi that he was having difficulty walking around and even rising up as he fell on occasion.

The Master, then looking the young Monk in his eyes said . . .

“I had seen what you had done to the Fish, the Frog and the Snake, and as you thought it amusing in laughing as to each of their struggles; you’ve committed grave acts of cruelty to those who are defenseless.  Go to the mountain again and FREE each of them – THEN, I will free you. If you do not, you will suffer in your Heart and Mind for this suffering will become your Karma!”

The young Monk traveled up the Tang-Ji Mountain again only to find that each ;  the Fish,  the Frog, and the Snake, had each died.

The Young Monk began to weep in each case knowing he had caused suffering and returning to the Temple, he Shame- fully wept as he advised the Master Hoshi, what had happened .

” I see you are sorry in your heart for what you have done and I did to you, what you had done to them, the least of us. I did to you so that you should feel their suffering and will always remember throughout your lifetime, to never harm another again.  I love you just as if you are my son but most of all, God loves you as ‘ you are His son’ !

“Remember what happened here and let no man ever tell you, it is alright to Kill! “

I am not certain where this came from but I do know, there  are many areas of life I may consider “Necessary Evils” at which I have not and will not ever participate …taking a Life is one of them.

Blessing to all who read these words. 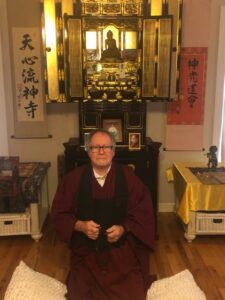 If you are interested in doing a silent retreat or for some reason you need elucidation on the teaching, please contact editor at: yao.xiang.editor@gmail.com