In This Field – Everything is a Story 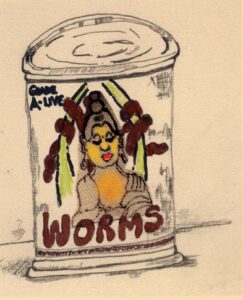 One evening after work, I was going to my car when I saw three kids playing in the alley.  This alley isn’t much of a playground, there’s a dumpster, a fire escape, a small gravel parking lot and a graded dirt road that runs between several buildings including an apartment building, where these kids lived.

In between all these structures and pathways are small patches of plants that found their way through the tar and gravel.

The oldest girl was standing along these plants searching for ladybugs and caterpillars.  When she spotted one, she would shriek and call out for one of the boys to come and see.  It seemed harmless enough until I saw what the boys did.  The boys pointed squirt guns at the unsuspecting ladybug or caterpillar in an attempt to harm the bug.

I watched and listened to the glee and pleasure that all three seemed to derive from their sport.  I watched and thought about how I could help the ladybugs and caterpillars.  I figured if I told them to stop, they’d wait until I drove off and continue their hunt.  It brought them so much pleasure I knew that my admonition to stop hurting the bugs would be of little help to them or the bugs.

Finally, I walked over to them and saw a small black-dotted red ladybug resting on a single leaf.  The leaf was soaked with water.  The boys, crouching to continue their kill, looked up at me.  The girl turned to see what I was going to do.

“You are the ladybug” I said.  “You and the ladybug are the same.”  The youngest of the three dropped his squirt gun and held his face in his hands.  The older boy asked me why he shouldn’t keep shooting the bugs.  He wanted to have fun and this game was fun.

I looked at the youngest child again and said, “You are all living beings.”  He squinted his eyes and said out loud, “That’s true.”  The older boy continued his clamor to continue his fun of harming the ladybugs.

Then I walked away.  As I was getting into my car, I heard the girl, who was the oldest, go over to the two boys and say to them harshly, “Now, you are going to go to Hell!”