In This Field – Everything is a Story PART II of II

I received a story from someone kind enough to send it on as a response to PART I.

Here is the response. It offers us an opportunity to clarify the teaching in PART I. 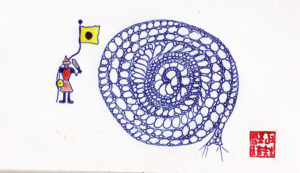 The Last Resort: Alter Course or Suffer the Consequence

Once upon a time, over half a century ago a young girl rode to school with her father. He was a man who had a habit of cussing and swearing. The young girl could take no more of his cussing and swearing and felt she needed to correct him. Guess what she said? You would be spot on if you said, “If you keep swearing, you are going to go to hell!”

That is an interesting story. Interesting because both girls warned those who were doing harm. The warning came in the form of a threat: “You are going to hell.” A fear and trembling intimidation.

In both instances the girls in the stories focused on the material realm of behavior. They threatened those who were acting out “habits” that came from underlying “tendencies.”

Rather than seeing the boundless field, each girl went to a level of black and white and a dualistic view of existence. It was a caution to those counseled to stop the tendency and end the habit of doing harm. The girls admonished which is an offering to purify the mind-state of those doing harm.

If we go with the child that covered his face with both hands when he heard that the ladybug was him, we have an altogether different approach to knowing the Oneness of existence.

In both situations the girls were doing their best to stop a behavior that was harmful although their admonishment was severe and misses a higher knowledge.

In Zen Buddhism, as in most traditions of transcendence, the higher knowledge is “Everything returns to the One, and the One returns to everything.”

There is ONE source…and we proceed and are that ONE existence with body and mind.

Sending someone to hell is not the literal truth but an admonishment of the material realm…i.e., stop harming that which is you. It is true that the conditioned world divides the world into good and bad, but that division comes from an ignorance of not ‘knowing’ what we are. In ignorance we tend to divide and measure the world according to social conditioning.

So, these girls responded from what they knew, but those of us practicing a higher knowledge need to be more like the little boy who responded with dropping his squirt gun and covering his face. He knew something in that moment that went beyond good and bad; he knew for a moment his true nature. A realization that he and the ladybug were one true reality underneath the camouflage of the body and mind.