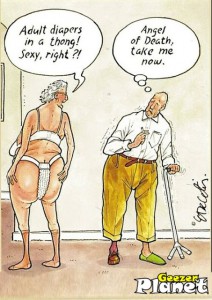 Salvation is in the air. We are going to make Zen relevant again. I’m all for it, although I do have a few nagging caveats when it comes to renewals. I’m not the man I was when I was twenty-five… but neither am I anybody else.

I look at Zen consuming itself in the fires of internet irrelevance and want to ask myself, “Would it be too much to ask that while Rome burns we just let Nero fiddle. Let him play his mediocre tunes with his fiddlesticks? And I answer, “Yes, it would.” I guess you could say that I didn’t come to praise Nero, but to bury him. (And if these aren’t fightin’ words, I don’t know what are.)

I’ve been fighting other religious battles, too. I would have responded sooner to our ZBOHY Call To Arms, but I just got back from a golf tournament (what else) in which we played for the Soul of North Carolina… I lost. At a crucial moment I was struck from behind by someone’s personal lord and savior. As a result, we watched par recede into infidel numbers.

But I did win my club’s championship and I cannot tell you how wonderful is it to have that assortment of North Carolinian Baptists now gather round the first tee to hear me chant: “Om namah Shiva yer, Om namah Sheev-eye.” Naturally, for my own protection, I play “drunken master” at the clubhouse.. It allows those I have offended to pass me off as either insane, at best, or drunk, at worst. I seem to have a better affect on the women than the men…save for one… and I married her.

It does appear that the world has gone to hell in a hand basket, but then again when doesn’t it appear that way? Some part of the world is always burning as religious zealots run around with torches, seeing what is flammable and what isn’t.

This retirement thing is an odd way to live. I’m not sure I would advise it as a lifestyle for everyone. I thought I would just sit back, play my guitar and watch that river flow. I quickly became surprised at how few songs I knew and to my great disappointment the river never flowed upstream. Having once been “out of time” and in no place I’m having a hard time resolving my “once upon a time” world to the one I now see.

The existential problem is different this time. There is no greater doubt than overcoming doubt, no greater faith than having none. I always remember that the Buddha once said he taught only The Path to the end of suffering, yet I constantly feel we gather in small rooms and talk a bit too bravely about the approaching storms. Winter is the horizon. Here in the mountains the trees do a lot creaking and even the dogs howl at the closeness of the moon. My finger may point at it and the dog’s tongue wag at it but there is no mistaking it. There is a grand forever out there yet we can’t seem to get out of the shit-house except in single file… it’ll take awhile to form a united front.

I have been keeping my focus sharp. There’s a pond just outside my window. I can encompass the entire surface without turning my head. There are thousands (if not millions) of midges, gnats, and bugs so small you can’t make out that they are there except they constantly hit the smooth surface and cause a three ripple wave. The pond is in constant motion as if being replenished with a gentle spring rain. I love that kind of rain, and when I first noticed it I walked outside to be cleansed by it. It was a surprise to learn there was no rain… just feeding time on the pond. On occasion a minnow or some bigger beast snatches one and causes a bigger splash. It disturbs the symmetry.

But there are always lessons I suppose, and it’s easy to understand that the bigger beasts are under the surface. Occasionally the midges have their revenge when the Blue Herron comes. She swoops in from out of nowhere and lands on the edges of that pond’s civilization. She stands completely still with eyes down as midges fall all around her then…with fantastic suddenness… her dagger beak thrusts straight through the surface into the nether world. And then her beak rises and points straight up. Something wiggles its way down to her gullet, and she turns like a slow motion ballerina and walks into the shade. Then the midges snicker as they keep falling like rain. For a little while there will be no more bigger splashes.

By now you can understand why I don’t write much about religious themes anymore. I lose track of things. My worlds get mixed up. My Maitreya Buddha is a Blue Herron standing in the shadows. And if Mike were still here he would be more supportive of my golfing expertise…after all he, comme moi, was not to the manor born, and it has been nothing but “the practice.” The Links as Temple; the White Cup as the Holy Grail.

And talking about Viagra… Nanci was cleaning out my golf bag the other day and found an elliptical blue pill in one of the pockets. She came into the kitchen with fierce eyes and hammered out; “What the hell are you doing with this? Don’t tell me you’re out there golfing all this time.”

I laughed and she got more furious, until I reached into the medicine cabinet and broke out my “almost full” bottle of 200mg Aleve, the “all day” medication for pain. Which I must say does look surprisingly like a Viagra pill (or so I’m told). She immediately mellowed out and her emotions went into an entirely different direction. I am constantly amazed at how similar anger, vengeance, and sex seem to be.

And lastly it is very, very good to hear from you all again. But where’s my Kenny? Has the world finally caught him despite all suggestions to the contrary? And the Serpent King Jeff and the Southern Tiger Je…ah what a motley crew. Life is a long and winding road.

Keep me in the loop with this new enterprise we’re forming. I may have a little left (with proper editing of course). Let’s talk about it. But beware, my perspective may have changed a bit. Bob Dylan in his 20s was not the same man in his late 60s but neither was he anybody else. Perhaps this little chorus illustrates it best:

“People are crazy and times are strange
I’m locked up tight, I’m outta range
I used to care, but things have changed.”