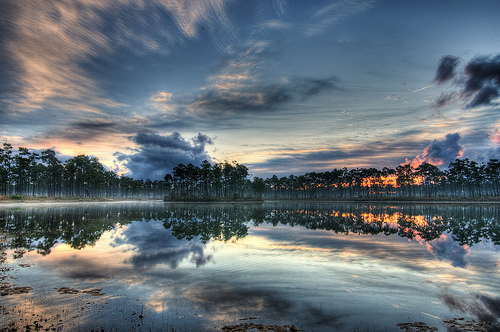 Have you ever looked through the window from a well lit room? You can see everything out onto the street. You can see people, things, the colors in the room and the trees and houses outside. But what if suddenly it gets dark outside?  You see only your image on the glass when you stand in front of the window and look out.

The beautiful moon, even with her ardent, blue light has no light of her own; she reflects the light of the sun. In the same way, we reflect the teachings we cultivate. Buddhist’s call the Buddha’s teachings “Dharma” and we consider them as a bright sun that enriches and gives warmth to our lives. The Dharma teaches us to respect others, to be humble, to be happy doing what is right and good for the community.

If we practice the Dharma with sincerity, when night comes to our lives we are able to see the beauty of Dharma’s light. We are able to see commonsense solutions to our problems. We see how our responses change our lives and the lives of those around us. We reflect what we cultivate.

Yet, when we abandon the Way and get into the trap of thinking only about ourselves, we keep our light confined to a tiny, lonely space. The refulgent moon vanishes and when we look through the window we see only the darkness of this world through our pale image on the glass.

An old story illustrates what I want to say to you dear friends.

Once upon a time, in China, there lived a grocer who was a most beloved amongst his family, his friends and even by his customers! When times got hard, he lowered the prices of his fruits and vegetables and sold them for less to those who needed it most. When someone was unable to get to his shop, he would make a special effort to go to their home after a long day of working and deliver food to them. He was always ready to donate some of his hard-earned profit to a good cause. His heart was sensitive to those who lost a pet.  He willingly posted announcements in his shop to help find the lost dog or cat. His life of service was simple and hard yet full of happiness and gratitude.

But things began to change. Even good people can lose the Way sometimes. It happened that this man began to resent his own generosity. When he noticed that those he helped had a more expensive coat than his he became angry.  In anger, he thought, “The poor I helped live better than me!” So he never lowered his prices again. He discovered that the money he gave to charity wasn’t spent as he wanted so he stopped contributing. And when he lost his cat, he looked for it all over the neighborhood and asked the other shop owners to display announcements about his cat. But in their apathy they didn’t. So he stopped helping other people with their pets too. And finally when he offered a reward to anyone who might find his lost cat he was outraged when the cat was returned.  He blamed the old woman who found the cat as the person who stole the cat in order to get the reward.

The grocer’s life became just bitterness and pain. He lost the love for life. He no longer cherished life, but instead hired some thugs to collect his debts, big or small from anyone that owed him money. His shop was empty much of the time, and those customers that did come in never smiled as they did.

His problems began to pile up as problems customarily do in the material world, the world Buddhists call samsara, the world of wandering. His once congenial, friendly nature became little by little a dark personality. He became ambitious, prideful and angry. Others stayed away from him. He lost favor in the eyes of others. Things got worse and worse. But one day, in an enlightened moment, a ray of sun pierced his heart and broke through his hardened heart.

“What happened to me?” he asked himself. In profound anguish, seeing what he had become, our man went to see an old Zen Master. “Maybe this wise man can tell what happens to me?”

After paying tribute to the Master, the old Master kindly asked the grocer to join him in front of the window. The Master asked him a question.
“Look through the window and tell me what you see.”

“I see the empty street, the park. It’s getting dark. Soon, dusk will come. Some people are returning from work to their homes.”

The Master handed the man a mirror and asked him to bring it up to his face and asked again.

“Now, look and tell me what you see?”

The man said with some regret, “I see my image on the mirror… nothing more.” The Master paused a while and then looked directly at the man and said,

“The glass that allowed you to see the world and the glass you hold in your hand are made of the same material. The difference lies in that, one is clear and pure, allowing you to see each thing as it is. The glass mirror is covered with a thin layer of silver coating and in that silver coating you see only your reflection.  And this is as it is in the material world we live in. Our ambitions and desires are not inherently bad, except when we see only our reflection through the glass. Seeing only our reflection deprives us of the vision of the world and our fellow brothers and sisters.”