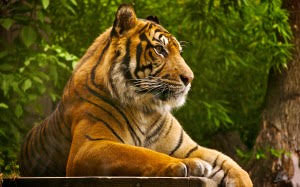 Part 5: A Tiger in the Belgian Forest

My step-father and I raced to the Birth House and found my wife sitting calmly on the side of the bed.  At first, I didn’t know what to think.  We had been warned about Braxton Hicks contractions – those so called “false labor” uterine pains that are often taken for the beginning of true labor.  Was she so calm because the pains had stopped or weren’t really labor pains?  She smiled brightly at me, and I asked, “Is the baby on his way?”  She and the two nurses in the room said, in unison, “Yes… it has begun!”

In French we have a saying that is almost exactly like the English, “Calm before the storm.”

But everything seemed to me to be too calm. She explained, “My water broke and the contractions started about two hours ago.”

I felt a little foolish standing there so I sat in a chair beside her bed and suddenly her face contracted as if she were really concentrating as if she were trying hard to remember something.  Her eyebrows were furled and her entire face became tense.  Little beads of perspiration formed on her forehead. Then she relaxed and her face seemed radiant as she smiled at me again.  I had put a few CDs in our “birth pack” and figured that this was the time to play some music.  I put on a recording of old French folk songs and suddenly the nurses, my wife, and I were singing along with the music.  This was the last thing that I expected to happen.  “Well,” I said to myself, “this is gonna be a piece of cake.”  Why did people make such a fuss about childbirth?  This was rather enjoyable.

A sing-along!  Wasn’t that nice? The birds were singing in the ranches of the tree just outside.  The rays of the sun were coming through the window.  Every now and then the muscles in my wife’s face would grow tense, and she would squeeze my hand, but the muscles would soon relax. Yes… this was going to be easy.

By the time the CD ended,  my wife started full labor and things weren’t so easy anymore.  The sun had set and the nurses lit groups of votive candles, giving the room a reverential or maybe even a cozy atmosphere.  And now, when the pain started, I could hear her chant “Om” and nobody was happily singing old French folk songs anymore.  I began to join her in chanting Om, and doing deep breathing exercises with her between her contractions.  Inhale for four seconds, hold the breath for 16 seconds, and exhale for 8 seconds… and then start again until it was time to chant Om again.

And then, despite the fact that my wife has sung in choirs, the “Om” wasn’t singing anymore.  It was shouting. And since there was less time to do the breathing exercise and more time to shout Om, I tried to hold the singing syllable as she relaxed between contractions.   We must have sounded like a couple of wild people in an ashram.

Through the window, I watched the stars come out.  And then a feeling that is known to all Zen meditators came over me: I felt a Oneness with my wife, the nurses, and the entire room.  It was as if the room was lit by something inside me.  Her chant of Om had been reduced to a whisper and then it disappeared altogether as if it had been internalized.  At that time the feeling of Oneness also disappeared and I was just myself sitting beside her.  She was totally in herself, her own world, and her thoughts were not shared with anyone.  She had that prowling look on her face, the look that in Chinese Chan we call, “A tiger coming out of the forest.” I wondered whether all the things I had once read about Yin and Yang were actually occurring.  Had her Yang chi risen up to meet her Yin chi, merging with it, so that now she had the eyes of that bright, determined but calm, tiger? Had her Yin chi come down to her belly where it was nourishing the baby before his long trip in his quest for light and love?  As I watched her lying on her side, transfigured, she became to me a magnificent tiger that occasionally lifted its head and roared.

The roar became more coarse, a growl or grunt was added to it, and one of the nurses said to me, We’re in the last stage.  The baby will soon emerge.”

At that point I was lost.  I felt like a spectator at a play that was given in a language I didn’t understand.  I didn’t know what was going on.  There were a few more deep grunting roars and then the nurse said, “I can feel the head.”

And then, a few moments later, I could see the crown of my baby’s head for the first time.What a feeling! For some reason I felt like an archeologist who had just discovered a priceless artifact.

He came out, but face-down, and I couldn’t see his features.  Then the nurses picked him up and turned him around to show us that he was perfectly formed.  He wailed and we yelled in triumph. My wife just totally went limp and cooed the way mothers always do.

The nurses washed Eliott and tended to my wife for a few minutes.  They weighed him and filled out his birth certificate.  They wrapped our little tiger cub in a little blanket and handed him to my wife.  Her cooing exponentially increased.

A few hours later, we were all lying on the same bed.  The Birth House, unlike ordinary hospitals, allows patients to call restaurants and ask them to deliver food.  All the grandparents came into the room and we all celebrated with Pizza and Coke.  My wife was as hungry as I was relieved.  Little Eliott slept between us.  He was no longer our little “shrimp.” He was our son.

I felt as though I had conquered the world. This birth business was so easy!  What was all the fuss about?  So it took a mantra and a breathing exercise… and, Oh yes… a few French folk songs… I patted myself on the back.  Zen preparation!  Zen training!  And this was all there was to it.  My wife and I were on a bed with a sleeping baby between us. It was simplicity itself. I felt like reciting the old Dao quatrain:  “How wonderful!  How mysterious!  I chop wood.  I carry water.”

Little did I know.  Maybe the Dao monk who penned those lines meant chopping the wood of all the trees in the Ardennes.  Maybe he was thinking about carrying the water of the entire Mediterranean. It may have been wonderful and mysterious, but it would also be scary and exhausting.

I would soon learn that what I knew about babies any father on earth could safely forget and not run the risk of being uninformed. In short, I knew nothing… nada…zilch.

My first lesson would be: tiger cubs are nocturnal creatures.  My second? They have toilet habits that are totally unacceptable in an adult world!

Fatherhood takes a man out of dreaming and, like the Buddha, causes him to awaken… frequently.