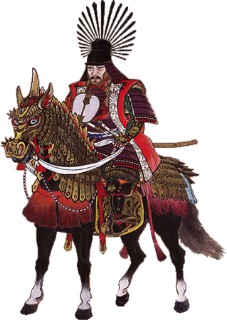 COMMENTARY ON THE HAGAKURE

Part 3: The Samurai and the Shogun
by Ming Zhen Shakya

Kyoto had long been the exclusive domain of the Fujiwara clan; but when the Minamoto and Taira clans turned against the Fujiwara and took Kyoto for themselves, the spoils of victory were not equally divided. The Minamoto seized the opportunity to become the pre-eminent force, taking over most of the responsibilities the Fujiwara had had for generations. The Taira, as might be expected, resented this unilateral acquisition of power and the feud between these two great houses escalated into a five year war that brought even more turmoil to the country.

The power alternated between the two in one bloody contest after another; until finally one great Taira victory inflicted particularly heavy casualties on the Minamoto who then retreated to Kamakura, near Tokyo Bay, where they recovered, waited, and prepared.

The Taira moved into Kyoto and gorged themselves on all the perquisites that the Fujiwara had enjoyed. Life was wine, poetry, fashion, romantic intrigues, favors for friends, and intermarriage with the imperial family. They not only lived the same life as the Fujiwara had lived; they made the same mistakes. Rather than quell the riots in the provinces, they ignored them, preferring to turn their attention to silks and gossip. When, by 1180, they were sufficiently “soft” the Minamoto struck.

Victorious, the Minamoto chief, Yoritomo Minamoto, called himself Shogun (seii -taishogun – the “barbarian suppressing commander in chief”). History would consider him the first Shogun and the first real statesman of Japan. Yoritomo avoided the errors his predecessors had made: he put his administrative offices, the Bakufu, in Kamakura, far from Kyoto. The Emperor, placing his imprimatur upon the Shogun’s legitimate claim to secular power, continued to perform ceremonies and rituals in Kyoto, but Japan’s secular government, the Bakufu , firmly held the real power. Since Yoritomo preferred meritocracy to nepotism, he was able to bring efficient administration to government affairs. Cosmos replaced chaos as the norm of Japanese life.

Courts were created as were administrative departments – the most significant of which was the samurai-dokoro, the “service room” where retainers of the noblemen convened. This “service room” now functioned as a complete, multi-tasked Department of Defense.

After Yoritomo Minamoto’s death, his sons, having proven themselves incapable of efficient statecraft, were displaced by his widow and her family, the Hojo Clan, who acted as regents and assumed control of the government. And for the next century Japan prospered. Buddhism flourished, and trade with Korea and China brought new crafts, skills, and philosophies into Japan.

And then, as the momentous thirteenth century began, the ingredients for greatness came together. The samurai “servant knight” was able to add to his fighting skills a regimen that provided for emotional control and a philosophy that gave him an understanding of the true nature of reality. Now it was not only unlimited loyalty to his daimyo and his fellow warriors – or fear of capture – that made him such an effective fighter, but he was able to acquire the spiritual means by which he could overcome even the natural fear of death. Dogen Zenji had returned from China, bringing Zen and a full range of Zen techniques for attaining egoless “detachment.”

Zen Buddhism explained the difference between the illusionary world of samsara and the real world of nirvana. But mainly, it gave a warrior a technique he could practice, one that would give him an extraordinary ability to transcend the ego entirely. Immediately, the samurai, knowing that a warrior’s greatest opponent was his own ego, seized upon these ego-eradicating techniques. The samurai went from being fearless to being indomitable.

Since a properly trained and motivated samurai would enter battle with his ego transcended, he could be killed, but he could not be defeated. He was “not there” to be defeated. And while he fought, his chances of victory were enhanced greatly; for he would be placing at the disposal of his supremely aware and capable interior Buddha Self all the skills he had acquired.

The information had not arrived a moment too soon. The Mongols were on the move.

Before the hoards of Genghis Khan slowed down and stopped, they would conquer Asia, the Middle East, and Eastern Europe. Once they had secured China and Korea, a move against Japan was inevitable.

Kubilai Khan, grandson of Genghis Khan, sent an emissary to the Hojo Bakufu to communicate a polite request that the Japanese accede to his demands… or else. The Hojo Regent preferred to test “or else” and ignored the request.

The Mongols responded by commanding Korean shipwrights to construct some 450 ships of various sizes that could carry 15,000 men, horses, and weapons of war across the Straits of Korea to Japan. The invasion would occur in November, 1274.

The samurai braced themselves. They assumed that the invasionary force would land at Kyushu, the island closest to Korea, but they did not know where specifically that landing would be. Positioning themselves in small groups at various locations on the coast, the samurai waited to be surprised. The most that any contingent could hope for was that when the attack came, fellow samurai would rush to reinforce its defensive position.

The Mongols easily took two outer islands and landed on Kyushu where they were met by the nearest group of samurai warriors.

Although the samurai were outnumbered and had no comparable weapons, they fought valiantly. Relying on their zen-disciplined mind and the confidence that can only be acquired in the absence of ego, they fought with a fierce determination that their enemies, many of whom were Chinese and Korean conscripts, simply lacked. When night fell, both sides, needing to eat, rest, tend their horses and their wounds, retreated – the samurai to the rear of a hill and the Mongols to their ships. The samurai waited for reinforcements. The Mongols waited for dawn.

For most of the expeditionary force, dawn would not arrive. Through the night a storm lashed the coast, and the Mongol fleet, comprised of numerous boats that were actually large, difficult to maneuver floating stables and cargo vessels, were capsized or driven onto the rocks. The battle had lasted only that one day.

Kubilai Khan learned of the catastrophe and ordered that more ships be built and an invasion force many times larger be readied for another assault on Kyushu. He sent more emissaries to the Hojo Regent demanding capitulation. The Regent obliged by beheading the ambassadors.

The Bakufu immediately prepared Kyushu’s defenses. The Regent ordered a defensive wall to be built along the area of the first invasion attempt to impede the movement of horses and carts. He did not try to duplicate any of the Mongols’ weapons. The crossbow was superior to the ordinary bow, but only to foot soldiers; and the samurai were not foot soldiers. As to catapults and trebuchets, they were cumbersome to move and there was no way of knowing precisely where the Mongols would try to establish a beachhead. A well-trained cavalry – mobile and lightning fast – was deemed the best force to oppose the invaders. He ordered the training of large numbers of troops and positioned them around the expected landing sites. He also created a fleet of small warships and, in the patriotic spirit that coursed through Japan, the country’s most expert sailors, the pirates, volunteered to assist in the anticipated naval battles.

Since other military adventures were occupying the Mongols’ attention, the Hojo Regent had ample time to prepare. The first invasion attempt had occurred in November 1274: the second came in June 1281.

Kubilai Khan sent two armadas, one from Korea and one from China, carrying at least a hundred thousand troops. He had launched the largest invasion force that history had ever recorded.

Spies reported the unprecedented numbers to the Japanese court. Truly as a supplicant, the Emperor of Japan went to Shinto’s most sacred shrine at Ise and begged for divine intercedence. He would need it.

Kubilai Khan did not concern himself about the defensive wall that stood in his former landing zone. He simply landed his forces elsewhere.

The Japanese navy, with its small highly maneuverable ships, was able to damage many of the cumbersome transports; and the great number of samurai and trained foot soldiers that massed in Kyushu advanced quickly into battle.

The Mongol strategists evidently did not expect the conflict to be a long one. They had landed their forces at the end of June well in advance of the August storm season; but Japanese resistance was such that the battle continued for the six weeks required for the Emperor’s prayers to be answered. A typhoon struck the coastal areas and destroyed the Mongol fleet. It was a divine wind (kamikaze) that saved Kyushu and terminated the Mongols’ quest for Japan. It the only defeat they had known in their Pacific to Mediterranean conquest.

After the victory, the spirit of unity that had held the Japanese together for five years vanished, and the old internecine strife returned. The high cost of the defense of Kyushu left the Kamakura Bakufu in enormous debt, and the Hojo government found its power slipping in the direction of Kyoto. A new and aggressive Emperor had come to the throne, wanting more than titular power; and many daimyos, some resenting the Bakufu’s failure to repay monies they had lent to finance the war, and others, hoping to evade paying their share of the war’s cost, pledged their loyalty to the Emperor. Having an excess of warriors, they sent him military support.

Desperate, the Hojo Regent sent an army headed by General Ashikaga against Kyoto, but as the army approached the city, the general, a noble descendant of the Minamoto Clan, announced that he had switched his loyalty to the Emperor. The Kamakura Bakufu was finished.

General Ashikaga’s sudden change in loyalty to the Emperor did not mean that he was ceding any military authority to the throne. He had himself declared the new Shogun, ending the Emperor’s hope of becoming ruler of Japan in every sense of the word. The new bakufu was established in Kyoto.

And then for the next three hundred years the old feudal conflicts plagued the country. But so did the rise of professional, mercantile, and industrial classes; and in the midst of so much devastation and violent death, so did art and architecture. (It was during the Ashikaga shogunate that the Temple of the Golden Pavilion was built.)

A farm can support a limited number of family members, and children born in excess of that number must leave to make their living elsewhere. Fortunately, there was a market for every kind of item, from lumber to leather, from ceramics to silk. Commercial centers attracted workers and merchants and they, in turn, created the need for restaurants, inns, apothecaries, scribes, brothels, artists, physicians, entertainers, and temples. And wherever there was a town there was a dojo, a sensei, and a group of young people who wanted to learn self defense. Zen Buddhism, which was the religion of choice of the samurai elite, also became the religion of choice for those who sought the advantages of subliminal reaction’s speed. Zen monasteries instructed their monks in all forms of the martial arts.

Zen was not the only religion that provided for the transcendence of the ego: all great world religions provided for such transcendence. And it was not the only religion in which a man could be both a profoundly devout practitioner and also a fierce warrior at one and the same time. But in medieval Japan it was Zen that offered short-cuts to that desired state, and a philosophy that could support both a duty to civil authority and a duty to the Dharma.

Politically weak and unable to curtail the warfare that plagued the rest of Japan, the Ashikaga shogunate contented itself to keeping the dazzling circumstances of Kyoto well polished.