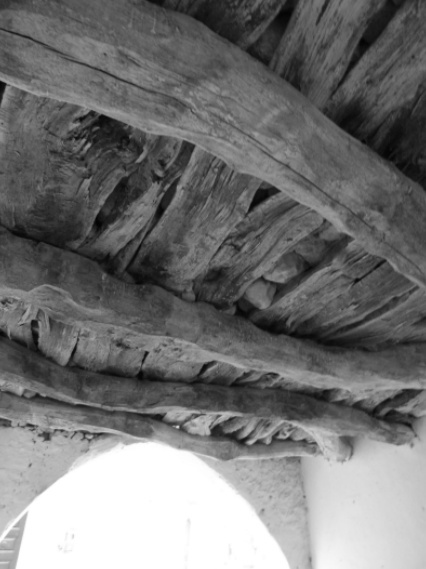 Part One : Grand-daddy owns a “Taverna”

The title may seem pedantic, and the subtitle a bit over-reaching; but my series will give you, I hope, a Zen look at giving birth and facing death in a very short life. Maybe these are just my views on  “being and non-being” as seen through the astonishing image of giving birth from the “nothing important” act of just having sex.

It won’t be anything earth-shaking. I’ll try to present a series of small articles on moments shared with my wife and first boy.

This introduction will be a small episode in itself. It was inspired by an event I had in the Greek island of Crete in July 2014 when my wife was seven and a half months pregnant.

She puts more wood on the fire, and he serves me another glass of his home-made wine. “Kallo Krassi” (“the wine is good,” one the few things I know in Greek), I answered. Our hosts were the humble owners of a beautiful “Taverna,” a typical kind of cafe in the Cretan village of Rustika.

My wife and I chose the place for two reasons, first, it was recommended, second, it was the only one we could find. We were told the villages in the area were not that beautiful, but that the mountains were charming and very accessible. It looked fine to us. We didn’t want to spend our holiday in this part of the Mediterranean lying on beaches or sitting in night clubs.

No, we wanted to go high in the hills and visit monasteries and holy places. The atmosphere of Orthodox Easter coming a few days later was in the air, and in this very religious, spiritual region, we were absorbed into the atmosphere. Although it was late in her pregnancy, my wife was full of energy and looked forward to driving through the mountains to stop at holy places in our tiny rented car that seemed easily able to drive us anywhere. But this was, after all, our first baby, and despite the energy and the enthusiasm we felt visiting mountainous holy places, we both felt an increasing anxiety about the coming birth.  Especially me.  It’s scary when you know how many things can go wrong.

When we first entered the Taverna, a bearded old man was setting a fire in a big fireplace and his wife was cleaning tables. As the sun was setting, the place had a reddish and gold glow that made it feel cosy and friendly… and it was quite empty. We sat down and quickly understood that there was no menu and that couple’s English language skills were limited. But their words were said with simple and open smiling faces and we had no problems communicating.

After ten minutes a few locals came in and began drinking and playing instruments. The room was no longer empty. I was feeling happy and thought this Taverna could have been in the Portuguese village I was born in. The same friends gathered toguether after a long day of work; the same reddhish light at the end of the day; and the same folk songs sung and the same instruments played. I’ve lived in Belgium for more than twenty-five years now, I grew up and studied in Belgium, loved and married in Belgium, and always felt at home there.  But I remembered the pleasant sense of togetherness I felt in the villages of my Portuguese region of Alentejo.

We ate and drink everything they put on our table.  The majority of the dishes were made by them, and the rest came from the surrounding shops. A few hours later we met two English families and shared a few laughs with them; and then everyone prepared to leave. Suddenly our wonderful old host, the old man – whose name I can’t remember – stopped me and my wife and asked us, in a kind of grandfatherly way, “Are you believers in God?”

I asked myself if I should start to tell him the details of my own vision of divinity. I decided not to and simply answered, “Yes, in my own way.”   He nodded and told us to pay our respect at the church.  “Hurry,” he said, “it’s near the end of the liturgy and ‘the holy words’ that are said then will be a special blessing for your baby.”  We quickly went to the old Christian Orthodox Church and as we entered we were consumed by the ambiance of the place.  The scent of incense, the light coming through the colored glass, the tinkling of cymbals, and the voices magically chanting.  We heard that final prayer, and when we left, we seemed to have left much of the birth anxiety behind us, as if it had been carried up and away by the smoke and the prayers.

The whole experience was a lesson in humility, in the true meaning of happiness.  These were ordinary folks, no one of any great importance, yet in their grace and “elegant simplicity” they had become marvelous icons, the living embodiments of people God surely had made in his own image. They had no stratospheric ambitions and were content to live down upon the earth in a very human way of life.

As we drove on, they made me remember my own grand-parents, all of whom worked in jobs that are mostly forbidden today in Europe.  They had been child servants in rich homes, miners and farmers. And they all had those smiling faces that were full kindness and compassionate yet could never quite conceal the lives of hardship they had known.

What, I wondered, will I be like when I am as old as they?  In our age of smartphones and wifi everywhere, the context is always changing; but what it means to be a human being and to deal with the world shouldn’t be allowed to change. Yet. when so much is instant and anonymous, how do we remain true to ourselves and to others?  With the scales always growing longer and more complex, how do we harmonize with this world?  More simply, for me at least, I stopped worrying about the baby. It all came down to the big question: what is it going to be like to be a father?  Will I fill the role naturally, will I grow into it with time…

Go to Part 2: Vespers in the Night