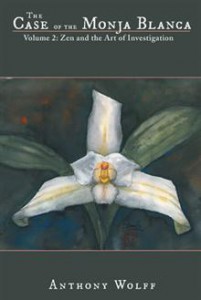 For those who do bad things:
For them there are no pains;
Their bodies are sound and sleek.
They do not share in human sorrows;
they are not stricken like others.

Parables have been and still are a fundamental method of teaching often illustrating crucial principles of spiritual truths. At least the succinct tale with a universal punch is. The simple reason, which is most likely the main reason for this teaching method, is that we love stories. We love stories because stories touch the heart. Stories bypass the reasoning mind and often go straight to the heart like warmth and light on a bud. Stories open the heart. And this is quite a teaching feat.

When the heart is pierced things change. Recall Cupid! When struck by Cupid’s arrow we are slaves of the heart. But there is a caution here for every would-be story teller, especially those who wish to share the heart of Zen. Cupid’s prick, we must remember, is equivalent to a tale without balance, a tale that pounds out stimulating depravity in such a way that there is no reason, no universal merit buried beneath the titillating perversity. As every Zen Master knows life isn’t one-sided by any obsession, even crime. There are no anti-heroes in spiritual mysteries.

‘Shoot’em ups’ and ‘screw-ups’ are part of the human condition of suffering but a tale that does not place the misery that we inflict on one another in the middle of the Big Truth does not show any essential principles of Reality. The storyteller who chooses the task of showing spiritual principles by telling a tale runs between Cupid’s bow and the Billy Sunday pulpit performances. It’s a big job and requires finesse and an elegance of refining the tale in delicate and tactful ways that unlock the heart of the reader as well as provide a short and to the point Dharma message.

Ming Zhen Shakya is a Zen Master, a writer and an avid reader of mystery. And in the name of Anthony Wolff she has cast her lot in with those storytellers that attempt to pull the latch on the hearts and spirits of her readers and nudge them towards the summit of salvation. But the work does not hammer anything down rather it taps and pats out a Dharma message somewhere in the story leaving it up to the reader to contemplate it or not. In typical Zen fashion the reader needs to be a seeker to find the jewel, but the jewel is there if sought out.

Ming Zhen Shakya’s spiritual pioneering in her series Zen and the Art of Investigation, written under the name Anthony Wolff, cross into the world of spiritual storytelling without preaching and without flagrant titillations. Her intent is to tell a good story and tell it in such a way as to sprinkle the Dharma rain somewhere in the book. There are crimes, tensions, and the uncovering of ugly hardheartedness. And in this mischief there are Dharma showers.

Anthony Wolff’s (aka Ming Zhen Shakya) choice of genre is the mystery story. And as many know mystery stories are moral tales. The moral part of the story is often overlooked because readers of mystery love the mystery and rarely contemplate the moral rectitude since morality naturally follows the demands of a mystery. There are good guys and bad guys. The good guys find out about some bad thing that has happened and attempt to stop it from happening again and again. The good guys have to stop the bad thing. This is the basic mystery plot. Who did it and how? And how do the good guys find out who the bad guys are and stop them.

Enthusiastic and keen mystery readers know this at the cellular level and they never question it unless something is missing. Anthony Wolff’s choice of ‘mystery’ books assumes that the good guys, the three detectives, get the bad guys, without giving away the plot, generally do.

Wolff’s three main characters, George Wagner, Beryl Tilson and Sensei Percy Wong are sleuths that take their work seriously and attempt to do the right thing for their clients. But Zen works in the Middle Way perhaps the only place where the wholeness of reality is seen. No one is left out of the travails of life. Wagner suffers with a disability from his professional past and lives with the remnants of addiction. Tilson, a man’s woman, struggles as a widow to get educated, to raise her son and work at the same time. Sensei Wong, a karate master and Zen priest, perhaps the most even-minded and stable of the threesome was born into a cultural dichotomy. His parents divided everything along the lines of the likes of ‘cheerios’ versus ‘rice’ leaving Wong to choose between them.

Wolff lets the reader know no one, not even the good guys are left out of the bitterness of life. The difference between the good guys and bad guys is etched out across what they have in common. The ups and downs of feelings, moods and spiritual needs touch all of the characters. Wolff knows that no one is left out of troubles. Good guys suffer. Bad guys suffer. The response to trouble, for the most part, is what separates intentions, decisions and actions.

And the good guys know the truth of the Zen adage,”…(T)he eye cannot see itself…,” which seems to be central to the detectives understanding of everyone as “…self-concerned, but…rarely self-aware.” The reader is left to discern the difference. It’s understood that Beryl and Sensei Percy, two of the detectives are Zen practitioners and martial art adepts which comes in handy when fighting hand to hand the foes, con artists and transgressors. George, the only detective having professional training was a former police officer, opens the detective agency. These are the good guys. The bad guys are those who respond to the demands and needs of modern life with skills outside the bounds of the law of the land.

In one of Wolff’s earliest novels, Monja Blanca we find somewhat questionable aristocrats hiring George to investigate the virginity of a would-be bride. A tough assignment to be sure! The main con is a woman, who is smart, savvy and successful at running the swindle. It’s a trans-generational business; her husband taught her and she taught her son to cheat. But there’s loyalty amongst these thieves for they seem to share everything from money to bed partners. The gang leader, the Contessa suffers from thwarted ambition and humiliation and finds her scams lucrative and satisfying. She appears to live up to psalmist’s description of those who do bad things; sound, sleek and without sorrows.

Monja Blanca is full of the mystery genre’s twists and turns. Victims are left holding empty bank accounts and stunned by the finesse of these thieves. Justice, where things get wrapped up and the good guys brush off the dust from the oppression of the crooks, ends this whodunit with a revelation from the good guys.

Pioneers are often best understood after they have led the way where they break new ground. Anthony Wolff may fit this breaking ground description. The set-up of each book is a must-read preface especially for the new reader. It sets the Zen stage with an old Zen adage, “…(T)he eye cannot see itself” which is what the three detectives in each book rely on to determine what is true and what is rubbish. But none of it, none of the spiritual message is rubbed into the reader’s nose. It must be sniffed out in asides, descriptions, in contemplation of the nature of the bad guys and their bad deeds.

Anthony Wolff gives spiritually pithy hints, little Dharma talks given by Sensei Percy, George’s foolish sense of being enlightened and whispers of Hui Neng and Hagakure recollections as indicators of where the detectives really are and what the action suggests. Anthony Wolff’s work, the moral tale of light and dark is akin to the eighth Chinese Zen Master Shitou Xiqian’s understanding of the merging of difference and unity.

Mystery readers know this truth. The good guys stream into the darkness of the criminal world in the light of the subtle source never actually uttering a sermon or discourse. They show up and face the darkness on behalf of those in need.

Anthony Wolff’s storytelling proposes to those who seek the subtle source that ‘(T)he absolute works together with the relative like two arrows meeting in mid-air. It’s not elsewhere, some separate place that is foreign. For Wolff, the good guys work together with the bad guys in much the same way as two arrows meeting in mid-air. But as in any morality story of worth, the good guys, disturb, disrupt and dislocate the darkness with ordinary skills of body-mind training and strong determination. There are traps and mishaps along the way but in the end the Zen truth “…(T)he eye cannot see itself…,” but everyone is “…self-concerned, but…rarely self-aware” is turned upside down and inside out. Wolff holds out the faith that Wagner, Tilson and Wong’s intentions, decisions and actions are rooted in self-awareness and less in self-concern.